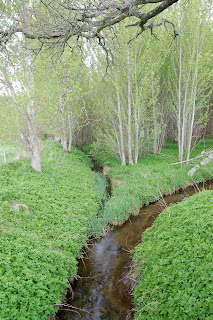 The day after my first visit to the middle section of the Baikie Burn I paid a visit to the upper end of the burn. Not the farthest reach, east of the main road and beyond the saw mill (where they knock out potato boxes), but to the west, where the old steading of the farm has been turned into housing.
We are looking at a small copse of poplars that has been cut over at some time in the past and has coppiced. A third of the way up the photograph on the right is a stem, felled by a beaver. From there on down to the point where I left the Baikie Burn on Tuesday is plenty of evidence of their presence. The Baikie Burn is about two miles long.
On returning to my car by the houses, I encountered a young woman and her son with their rumbustious dogs. I stopped and talked to them and this lady told me that the presence of the beavers was well known in the neighbourhood. She was keen to see them, but hadn't yet done so.
Posted by Paul Ramsay at 21:39