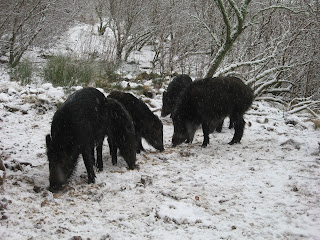 Wild boar feeding at Bamff.
The first wild boar came here just after the beavers in 2002.
This group, however, came here this past autumn. 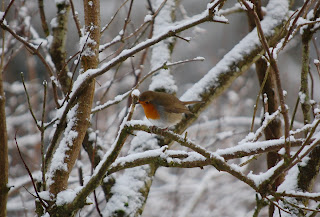 The robin (Erythacus rubecula) is a beneficiary of the wild boar. About six of the birds congregate round the boar when they are fed.
Usually they benefit from the boars' work, turning over the ground to reveal the larvae of various invertebrates, but here feeding time seems to bring in the robins. 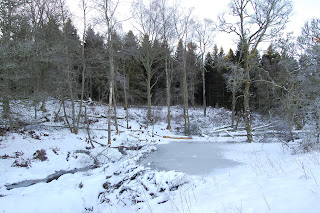 Until the last few days when it has been relatively cold (around -6ºC over night) the beavers were active, felling trees.
For the last three nights, at least, they have not ventured into the stubble turnip field. This surprises me a bit because I should have thought that, energetically speaking, it would have been worth the beavers' efforts to go out into the field to graze the turnips. 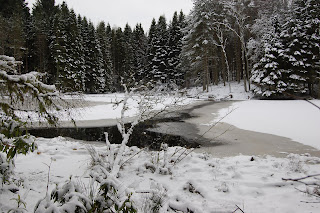 I took this photograph some days ago. You can see how the beavers have kept the waterway open to the other side of the pond.
The middle of the water is frozen over now.
Posted by Paul Ramsay at 18:06 No comments:

Winter - Did the beavers have trouble entering the warm burrow? 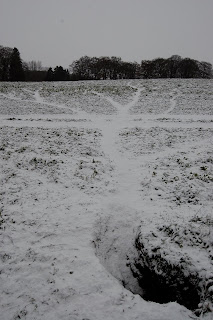 Here is that dendritic pattern again under a dusting of snow. The photograph shows further bifurcations at the end of the main branches since the earlier photographs. 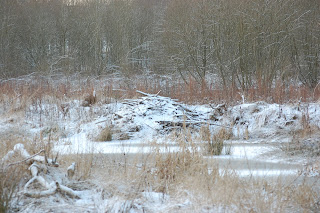 The main lodge in the western enclosure. 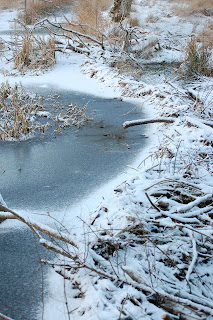 The dam at the other end of the lodge pond in the western enclosure.
Posted by Paul Ramsay at 18:37 No comments: 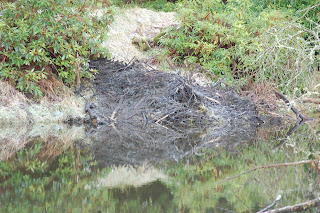 For some years this lodge seemed to have been abandoned, but this autumn it was clear that the beavers had decided to live in it again. The whole edifice has been freshly coated with mud and has been extended somewhat. 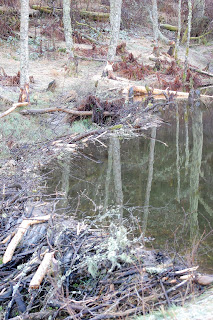 The freshly stripped sticks in the foreground have been added to this dam, the lowest of the three big dams on this stretch of the Burnieshed Burn, within the last week. 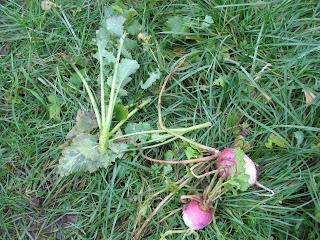 The field that runs along the north side of the Burnieshed Burn was sown with stubble turnips. These small turnips are sometimes called '100 day turnips' because they are sown sometime in June with a view to letting sheep graze on them quite early in the winter. They are not as frost hardy as swedes, but convenient as a catch crop.
On the 30th November and 1st December I posted photographs that showed the way that beavers spread out of their burrow and made their solitary ways into the field of stubble turnips. These were plucked from the ground, gnawed and left to be consumed later. 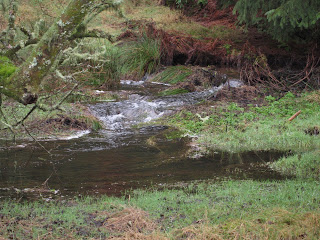 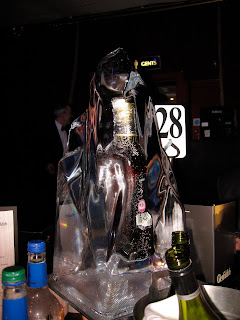 The Glenfiddich 'Spirit of Scotland' Awards' Dinner took place at the Prestonfield House Hotel in Edinburgh on Tuesday, 8th December.
The centre piece on each of the tables was a bottle of Glenfiddich whisky frozen into a shapely block of ice.
Louise and I thoroughly enjoyed ourselves, but the whisky was still imprisoned in its iceberg when we left.
Posted by Paul Ramsay at 17:31 No comments:

Tracks in the Snow and Trail Camera Shots 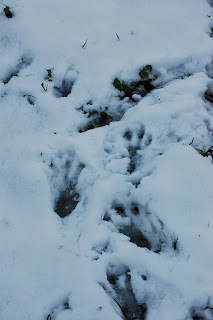 About an inch of wet snow fell last night and was followed by a slow thaw today.
There seem to be a disproportionate number of hind feet but, if you look carefully, you will make out some front feet among them. 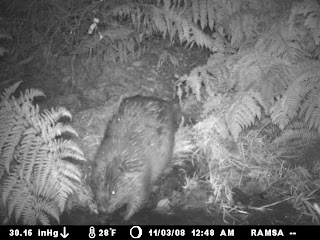 My brother-in-law, David Gibbon, has complained that there are not enough photographs of beavers on this blog.
He is right. I have to get to grips with the trail cameras. I put out one and had it all set up. With amazing forbearance I left it strapped to a tree for about ten days. I returned to the tree, undid the strap and carried the camera off in expectation, though remembering past disappointments.
Once in my office I took out the memory card and stuck it into a card reader. There were no photographs - not even of me, peering into the lens. 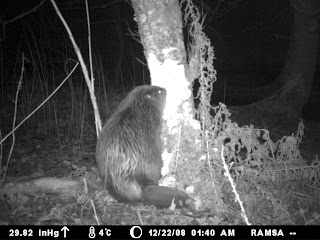 As you see, this photograph was taken nearly a year ago. I was very pleased with this.
Posted by Paul Ramsay at 21:30 No comments:

Dendritic Pattern of Beaver Paths from Back Entrance to Burrow 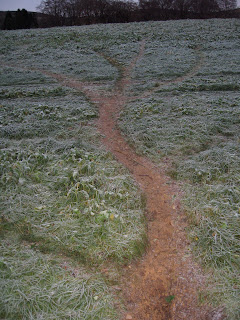 I took this photograph as the light was failing. All the same, the dendritic pattern of the paths shows up better than the photograph that I posted in yesterday's contribution.
Last night there was a frost, which hung on all through today, the first of December
Six paths or seven paths can be made out.
Posted by Paul Ramsay at 16:51 No comments: