A Canal carries the beavers' penetration of some woodland

An unexpected lapse on the part of my computer, and the realisation that I wasn't managing right, led to its removal to Fixmymac at Ormiston for a cure. The stay in Ormiston lasted only for a few days, but the time that preceded, when I thought that I would fix my machine myself, lasted for much longer.
I took these photographs at the end of September and they show the penetration of a grove of willow by the beavers. The weather must have been rainy at the time because, what is at present a path was then a canal. 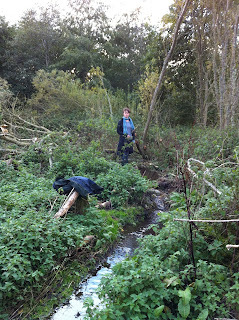 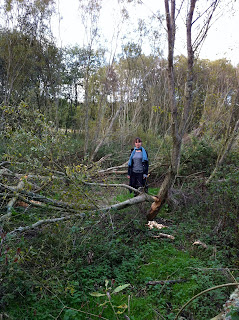 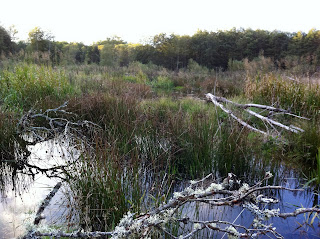 A quiet splash suggested the presence of an otter to me yesterday as I walked along the Burnieshed path. 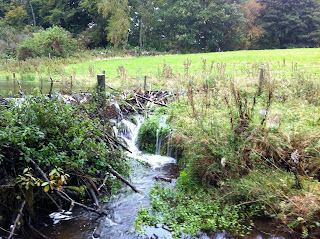 With high water the dams overflow and flumes carry the flood water over and round the dams. Rebraided channels gain gravelly beds once the underlying turf has been washed away. 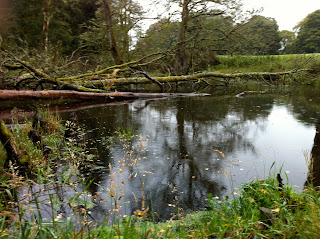 The dam in the foreground is still one of the Big Three in the burn  below the drive. Two smaller dams have been built downstream of this dam in the last twelve months. The ground falls away steeply about two hundred metres east of this dam at the suitably named 'Burnie's Head'.
Eurasian beavers tend not to colonise waters whose slope is greater than about 2%. It will be interesting to see what the Bamff beavers think about this. As it happens the Burnieshed Den has rather little willow or birch growing in it yet. The ground was densely planted with Norway spruce in the 1950s and was stripped of any birch growing among it according to what was accepted in those days as good silvicultural practice.  Birch is returning, however, following an accidental clear fell of the area in about 1993. I hope that a critical mass of birch and willow will be reached soon and we can look forward to another near native woodland.
Every now and then Fiona, an MSc student from Stirling University, and Stewart, a technician from the School of Life Sciences of that university, come to check the instruments they have installed in order to study the chemistry of the water in the Burnieshed Burn.

I found some beautiful examples of this fungus at the base of a dead sycamore tree. The tree has succumbed as a result of the raised water table resulting from the latest dams.
I think this is the dam with the greatest use of stone that I have yet to see. The dam is not a large one, but the longest stone in use that I saw is about eight inches (20 cm) long. 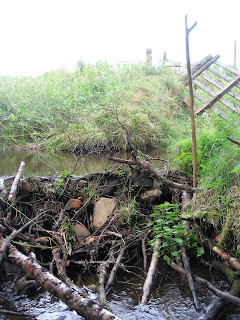 Here is a wider view of that dam. My staff is there to give it some scale. Looking at this photo I realise that the snap that shows the detail is misleading. Or, to put it better, I have allowed myself to be misled. It is true that a lot of stone is used in the building of one part of this dam, but the rest is mostly of turf, mud and sticks. 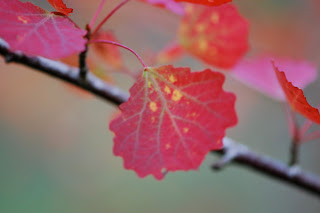 Another snap of the irresistible aspen
Posted by Paul Ramsay at 14:09 No comments: