A Scent Mound and a Couple of Clips 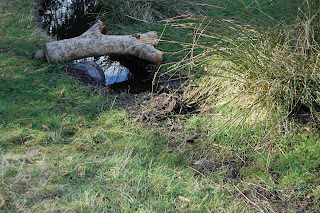 I often wonder why it should be that others see scent mounds where I see nothing. This afternoon, while out for a short walk, I saw the little heap in the photograph. I wondered if this, at last, was a scent mound and, rather than kneel down and sniff, put my hand on it. I sniffed and caught the lovely, pungent smell of beaver.

Now for two clips from my trail camera.


I don't know what the link below will take you to, but it was on a draft of a post that I never sent.

http://www.youtube.com/watch?v=7vb7qUQRRMU&feature=BFa&list=UUYprpN5yfSVRSom88ruT7DA&lf=plcp
Posted by Paul Ramsay at 18:54 No comments: 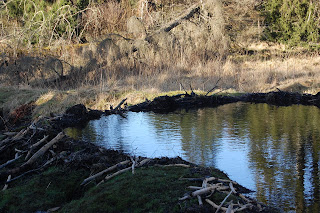 The next picture comes from a web site or something. It shows a couple of capybara with minister for the environment, Stewart Stevenson, inset. 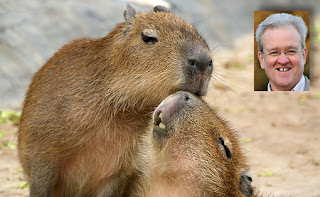 To go back to our beavers and their habitat: here is a beaver doing a bit of restorative work.

The breaching of the big dam revealed smaller dams. It is these that are being rebuilt now. The complexity of the underwater geography that beavers create has relevance to the ecology of the freshwater habitats: spaces are made for fish and amphibians as well as a multitude of invertebrates.


The minister's announcement that the cull would not be resumed was greeted with hysteria by English fishermen as this article in 'The Scotsman' shows. We greeted the announcement with delight, tempered by knowledge of reports that things were said privately to the landowners' organisation and some salmon fishery interests that contradicted the public statements. 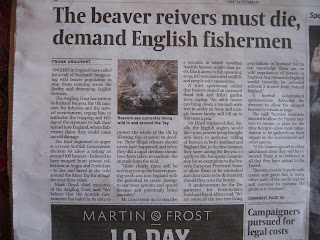 The article below was a leading article in 'The Scotsman' and took a humorous line about the whole affair. Thank goodness for that!

Reivers were raiders. the word applied originally to those Scots who raided south into England and their English counterparts who raided north into Scotland. They flourished through the late Middle Ages up to the seventeenth century, when religious and civil wars replaced simple raiding for cattle and sheep as preferred forms of violence. 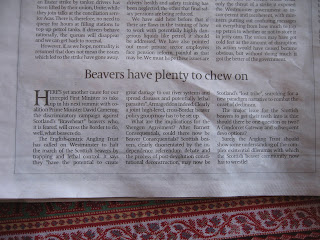 Here is an otter out, looking for frogs, I suppose. Perhaps it has found eels in the ponds?

More building as the beavers make good their habitat.

If only our species would restore our habitat with the patience and humility shown by beavers.
Posted by Paul Ramsay at 13:39 No comments: