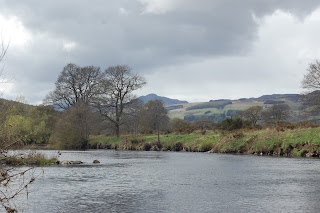 Getting on for three years ago there were reports of activity by a beaver on the Tay near Logierait. It was said that the Royal Zoological Society of Scotland had sent their trapper to try and catch the animal. Another rumour claimed that the farmer had sent the RZSS and SNH packing. He had not wanted the animal to be trapped and was happy to play host to it.
Somebody reminded me of this recently and knew how to get in touch with the farmer in question, so I telephoned and arranged a visit. 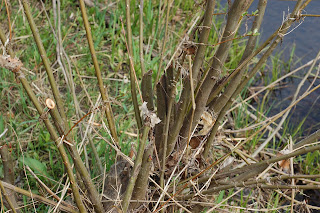 We walked down to the bank of the river and soon found plenty of signs of activity from the winter. We didn't see any really recent gnawing (such as from the previous night), but there was some that could have happened in the last week or so. 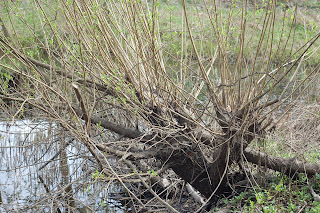 What is clear in this photograph is that we are looking at coppicing activity that comes from at least Spring 2009. 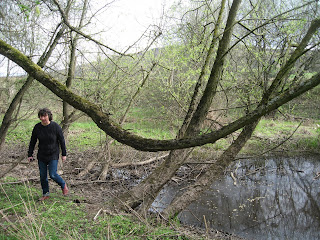 A really interesting sight was the coppicing of willow, carried out during times of flood high up the trees. You can see, at between roughly half past one and two-o'clock from Louise's head, branches that have been gnawed and then put out new shoots. 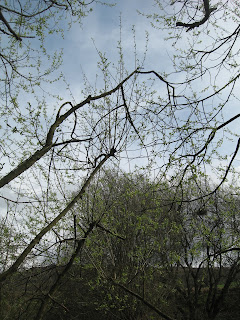 This picture shows the same two nodes of shoots from closer. 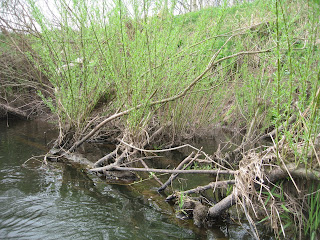 A kind friend suggested a paddle down the Dean to start my canoeing season. We set off from Cookston Farm, not far from Eassie, famous for its Pictish carved stone.
Evidence of the presence of beavers was with us almost immediately in the form of freshly gnawed willow.
These two photographs show an interesting pollarded regrowth. You can see that the water level has fallen back from high points through the winter, but the pollard shoots have risen abundantly out of the gnawed stubs left by the beavers last year.
As I have said, the presence of beavers was clear from Cookston until just short of the mixed woodland that surrounds the settlement of the mill and the weir at Cardean.
The Dean Water there is embanked in the run up to the weir and, in fact, throughout the area that has become a kind of policy woodland. The trees are mostly sycamore, beech and common alder near the water, I think. This gives the area a really heavy shade. It is easy to see why the combination of the embanked stream, the weirs and the dark shady trees would keep the beavers away.
We chose the left channel just by the mill lade and descended it successfully, though we stuck on the next shallow stretch after the weir, and Eddie Palmer, wearing his waterproof canoeing shoes, alighted and pulled us free. The route was the same, though in higher water, as the passage I took the time I followed a pair of mute swans in my first descent of the Dean Water in May 2008.
Once downstream of Cardean we began to see signs of beavers again, and so it continued as we negotiated the bog of Meigle and the confluence with the Isla.
As we carried our kit to the car a few drops of rain fell before setting in for the afternoon. 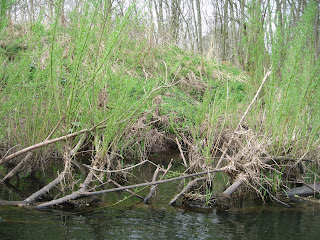 I saw my first swallow of the year as we paddled along and was pleased to see some reed buntings.
Morgan, of course, saw swallows at Bamff yesterday.
Posted by Paul Ramsay at 18:12 No comments:

A Beaver feeding and a heron watching 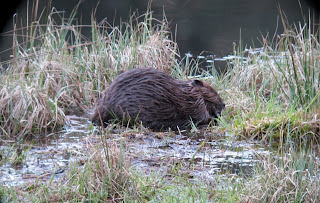 Another evening and a few more attempts at digiscoping without the UCA (Universal Camera Adaptor). I seem always to leave it until the light is failing and the camera shutter goes off at 1/8th of a second.
I set up the telescope and hardly had I set about scanning the pond when the head of a drake teal delighted me. A look to the left and to the right of the bird and there was a duck. After a while I shifted the telescope and saw the ripples of a beaver, as yet under water, but about to surface and, perhaps, to land. It did and quickly began to set about the sedge. 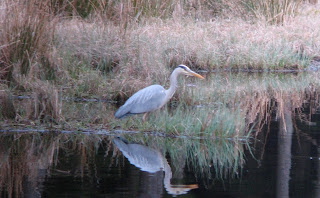 At about this time a pair of herons appeared. After some minutes this one of the pair had settled on the other side of the pond and stood, waiting for something to spear or grab.
Posted by Paul Ramsay at 22:29 No comments:

Beavers in the Big Pond 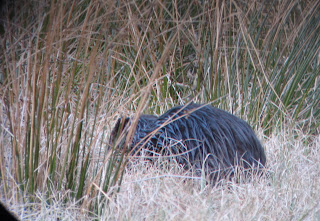 This was a cold, bright evening. Louise set off for her creative writing course and I gathered myself together and headed for the Big Pond.
Arriving at the stockade that was erected last year to handle wild boar, I found a number of the animals keen to meet me in the hope of being fed. However, I had other things on my mind and they ran away into the wood.
I set up my folding chair, extended the legs of the tripod, slotted the telescope into the mounting, sat down and began to look around. It wasn't very long before I noticed this animal grazing on one of the sedge rafts. 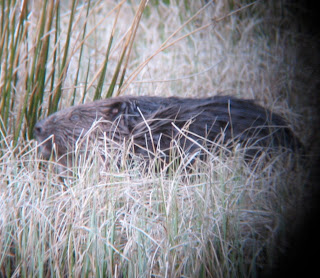 And here she is again. I was using my Canon Ixus 750 again without the Universal Camera Adaptor - quite a feat to my mind and too often not very successful. The difficulty of fixing up the UCA is that it is very hard to look through the telescope with it in place. 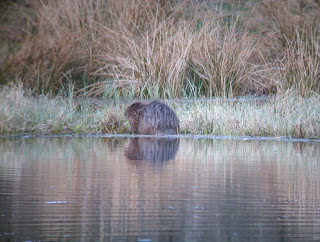 This is another beaver that I watched swim across the pond, land and start to graze. 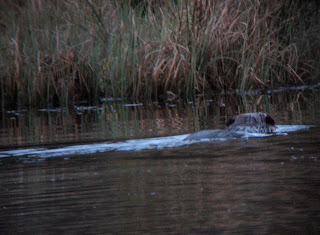 I may have taken this photograph before the previous shot. All these photos have been cropped. Gilbert was here this week end and announced that he was fed up with seeing photographs of beavers on this blog. He was keen to see beavers and, best of all, would like to take Adam Elias to see the beavers as well.
After some discussion we agreed that it would be very hard to prevent Adam from talking, even though he is an exemplary two year old, and so we should leave his first beaver viewing to another time soon.
I took this picture with my Canon Ixus 750 held to the lens of the telescope. There are three beavers in the photo. They are grazing on a sedge raft, eating what new shoots they can find.
Posted by Paul Ramsay at 21:11 No comments: 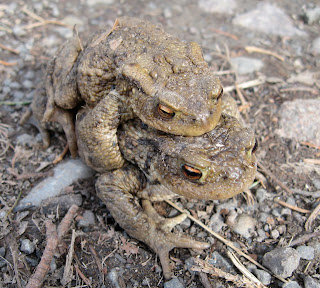 Yesterday, the tenth of April, I encountered several toads and pairs of toads crossing the drive that leads to my house. Some had been crushed, but those that I found alive I carried to places of safety and hoped they would make it to the ponds. This is one of the pairs that I took to a pond and wish them all the best. 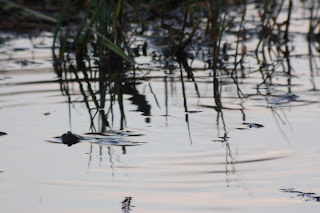 In the evening I spent some time at our Big Pond. The place was alive with the chorus of toads singing. The waters seemed to boil with their activity. 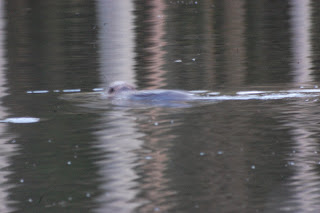 In due course a beaver appeared and swam around to check out the evening. 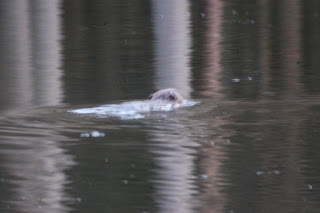 This is another shot of the same beaver. The photo was taken with my Nikon D40, using a 50mm lens, attached to a telescope.
Later I watched the two dark beavers feeding. One spent a little time grooming itself, but by that time the fading light made it not worthwhile trying to get a digiphoto of the creature.
Posted by Paul Ramsay at 21:48 No comments:

Beavers at the Big Pond


Yesterday evening Adam and I set off with telescope and tripod to see if we could digiscope a beaver successfully.
Here are a couple of results, taken after I had removed the camera from the Universal Camera Adaptor. I found the UCA rather frustrating because the camera kept turning itself off almost as soon as I had got it focussed on the scene ahead. In this way it was impossible to see what I was looking at - hopeless!
Without the steadiness of the UCA, however, I could not hold the camera steady enough and so you see the soft focussed results.
Practice is the answer. 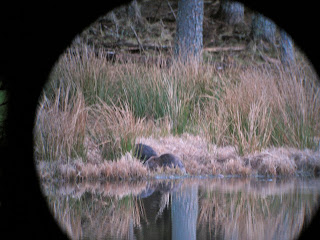 Adam had been looking through the telescope and had spotted a dabchick. He beckoned to me to take a look and I realised that there was something dark in the top left of the glass. I moved the telescope slightly and saw these two dark beavers. They were nose to nose inspecting each other. After some moments one walked off round behind the rushes, leaving the other to groom itself 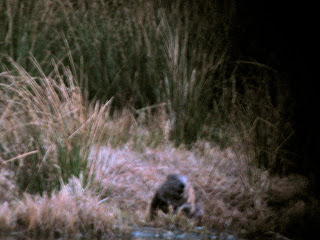 Here it is. Shortly after this a paler beaver swam across our field of vision. These were probably the same animals that I saw last week.
Posted by Paul Ramsay at 11:11 No comments:

The Wet Wood -A cold and windy evening 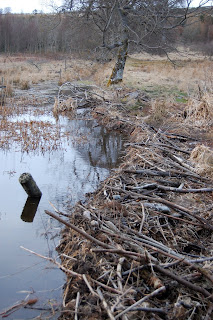 Yesterday evening I took my equipment and sat in the blustery wind to watch for the emergence of beavers from their lodge in the pond in the Wet Wood. Each flurry of wind ruffled the water and raised my hopes, but none came.
A roe deer walked through the trees in the distance and a rabbit loped out. Above me wood pigeons raced home to roost on the north-westerly gale. Some crows slogged by.
This photograph shows very clearly the way that beavers buttress their dams. 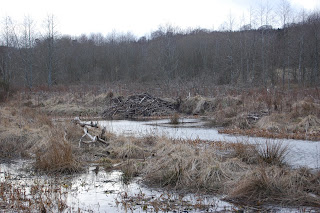 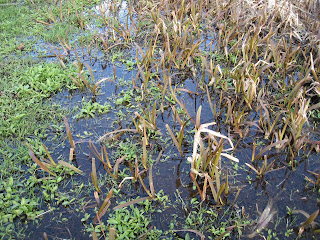 The first signs of growth are beginning to show. The reed canary grass is putting those purplish shoots and a wetland forget me not is growing some leaves. The beavers and other herbivores must be very grateful for this new vegetation.
Reed canary grass is often thought of a an aggressive coloniser at the expense of other aquatic plants, but it is serving a valuable purpose here.
Posted by Paul Ramsay at 11:39 No comments: