Crathie Bridge to Couttie Bridge on the River Isla 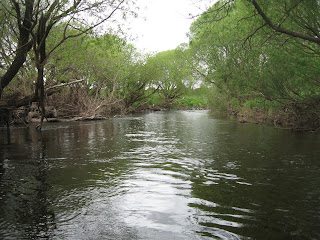 Heading off from under Crathie Bridge just north of Meigle, you find yourself quickly among willow shaded stretches of the River Isla. I soon noticed that the evidence of the presence of beavers in this stretch of the river was very clear. There was much more evidence of activity since I canoed this stretch of the river this time last year.
After an hour and ten minutes or so of easy paddling, with one exception where a fallen tree (wind blown, I think) had created a blockage through and over which I had to drag my boat, I reached the Boat of Aberbothrie. I don't know when this bridge was built, but as the name suggests, a ferry took people across the river at this point before then. 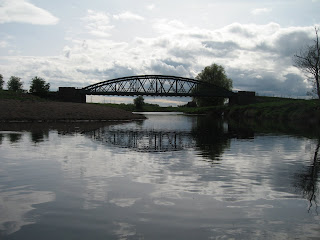 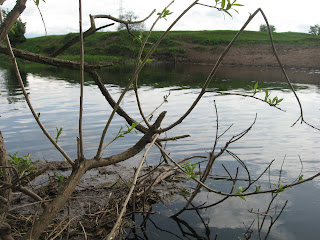 A few yards upstream of the bridge I paused for a few moments to photograph this little branch with its beaver gnawed twigs.

In the photograph below you can see cattle grazing in the middle distance on the permanent pasture beside the river. I was interested to notice that they had been consuming the canary reed grass at the water's edge. 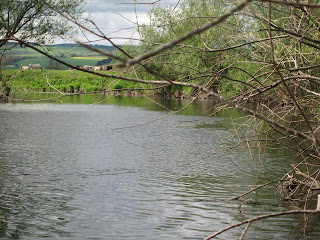 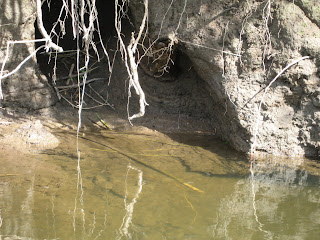 At some point in the journey I came across this burrow. It looks active to judge by the freshly gnawed twigs.
And later again I passed this impressively felled willow tree.
Down to the confluence with the Ericht there is a lot of willow on the banks of the Isla. Thereafter the riparian landscape becomes more open. There are still clumps of willow, where beavers have left their marks, but these are not so common. 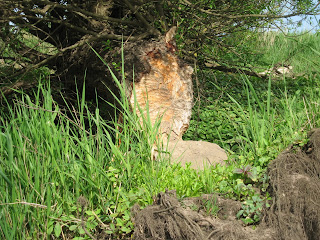 Couttie Bridge crosses the Isla a little north of Coupar Angus. It was built in 1766. Coupar Angus had (still has, but restored about twenty years ago) barracks from which garrisons could mount patrols up into the eastern Highlands in the period after the Risings of 1715 and 1745. Troops must have crossed the river by boat. By 1766 the military threat of the Jacobites had evaporated, so the bridge was probably built for commercial reasons rather than military ones. 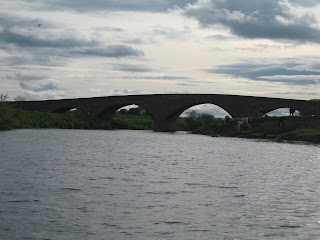 From Crathie Bridge to Couttie Bridge is nearly nine miles, a distance I covered in three and a half hours, paddling against the wind for much of the way after the Isla/Ericht confluence.

There were few stretches without recent signs of the beaver.