This the logo of the Scottish Wild Beaver Group. We set our group up last year and proceeded to become a SCIO: that is a Scottish Charitable Incorporated Organisation. Our Charity Number is SCO 42626.

Malcolm Appleby, the celebrated silversmith designed the logo and the graphics of the wording were decided for us by Niall Benvie, the well-known photographer and conservationist.

The design shows a beaver within a wetland world. The beaver has a somewhat embryonic look which hints at the early stage of the beaver's restoration to this country. I did mention to Malcolm that I was inspired by the idea of Courbet's paintings 'L'origine du monde' and his 'Source of the Loue'. I also found the play on the word 'beaver' irresistible.

Since posting this I have learned that primary school children are being shown this blog as a teaching aid and that Courbet's 'L'origine du monde' is unsuitable for them, so I have removed the photograph of that painting. 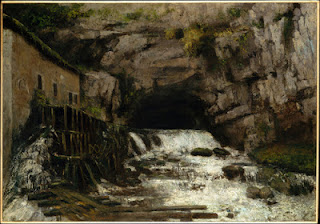 I first came across these paintings as illustrations in Simon Schama's 'Landscape and Memory' where he discusses anthropomorphism in landscape and Gustave Courbet's passion for it.

Searching, through Google, for origins of the word beaver as a euphemism for female genitalia, I wondered if the trappers and traders of North America ever had a sense of shame for what they were doing. Was it, even for the First Nation trappers, simply a mechanical transaction, or did they have regrets of the same kind as the walrus and the carpenter in Lewis Carroll's poem of that name? Was the beaver's name, whose shameful exploitation triggered feelings of guilt, transferred to that other source of shame and power in the Judaeo-Christian mind the vulva?

To turn to other things: 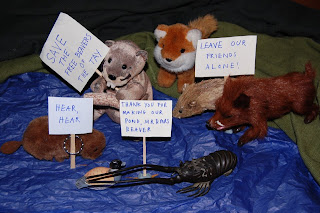 The soft toys are getting radical!

Some weeks ago it was put out that Stewart Stevenson, the Minister for the Environment and Climate Change was about to pronounce on the fate of the Free Beavers of the Tay. Nothing has happened, but those who attended the recent meeting of the National Species Reintroduction Forum were told to expect an announcement in a fortnight or so. A week has passed, so the announcement should be imminent. It would be good if as many people as possible sent emails to msp@stewartstevenson.net

Jean-Pierre Choisy told me of the 'Printemps des Castors'. This is a pan-European project to educate people to the importance of the beaver to the ecological health of waterways and wetlands throughout Europe. Here is the link:

If it were not for the forecast of colder weather, with the possibility of snow, to come it would be tempting to think that Spring was near.

Just to remind you of the recent cold weather here is a photograph: 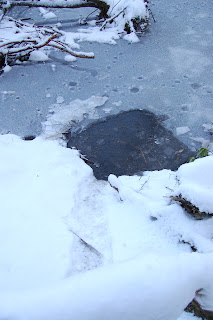 A beaver has broken the ice and entered the pool. 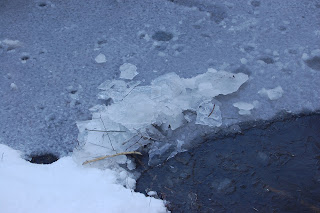 This photograph shows the neatly piled heap of ice on the left of the now frozen over hole at the edge of the pool, where beavers came and went through the nights. 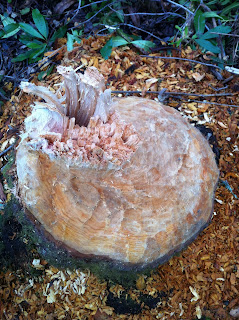 Windy Monday and that willow, so long held up by so little, fell. 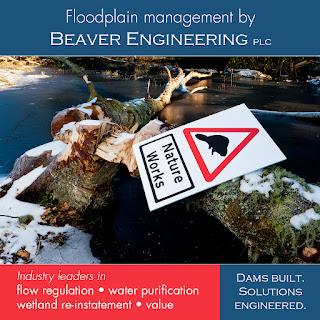 Niall Benvie and Charlotte visited us recently and Niall has sent us this splendid advertisement for Beaver Engineering plc. 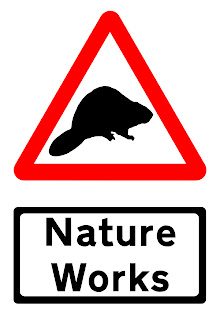 We plan to put this sign at the end of our drive.

I am reading Flaubert's Madame Bovary at the moment and noticed that, in the wonderful description of the wedding of Charles Bovary to Emma Roault, her father is described as wearing a new silk hat (un chapeau de soie neuf). Was this one of the new style top hats that destroyed the market for beaver felt hats and so saved the North American beaver from probable extinction? I should like to think so.
Posted by Paul Ramsay at 19:28 No comments:

It seems suitable to publish a few photos of the wetlands the beavers have made here. Not that you haven't seen a lot already. These photos were taken by my daughter, Sophie, who took my camera for a walk in the Wet Wood. 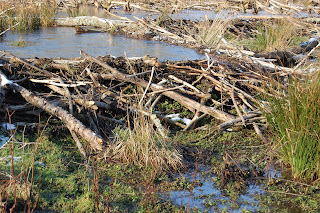 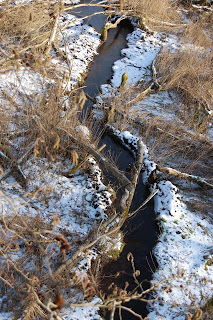 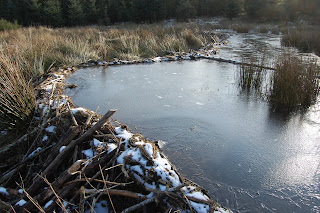 Another shot of the longest dam in the United Kingdom. How long before beavers build a longer one somewhere else? The length they have to beat stands at 110 metres as of today. What will the beavers do when it comes to Spring time and the work season begins again? 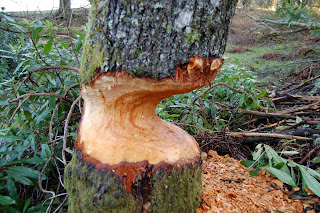 I took this photograph early in January. In fact, another photo of that willow, taken at the same time, figured in this blog on about the 6th January. To my amazement the tree is still standing despite some blustery days and nights.

Here are two photographs, taken of that tree today. Still standing, but for how long? 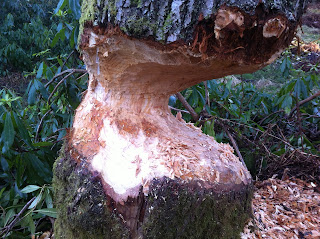 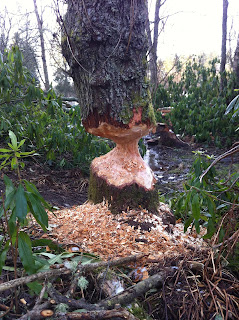 Notice the frigid looking rhododendrons near the willow. The Dundee Conservation Volunteers have been doing great work along the path through which runs the Cateran Trail. Our Dutch friend, Chris Schipper, brought some friends over last summer to bash rhododendrons and we are set to do a whole lot more of this work with the help of exuberant volunteers. This weekend the New Caledonian Woodland Volunteers are coming to work in our woods. What will they do: bash rhodies, respace birch?

Perhaps some of the wood can be converted into charcoal?