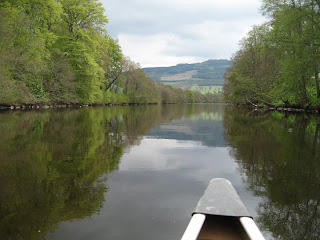 The weather forecast for Thursday, May 13th, was not good, but not very bad. I had arranged with Eddie Palmer that we should meet in the car park of the inn at Grandtully and head on for the Scottish Canoe Association's landing patch at Edradynate. Leaving Eddie's car there we headed on up the road past Aberfeldy and up the lowest stretch of the River Lyon, a tributary of the Tay. There, we put in the canoe and set off.
I didn't see any signs of beavers in the Lyon, but we did see plenty of barking of willow, and the other trees on the water's edge, by red deer. I should have photographed this, but forgot. The barking that the red deer did was a simple strip up each tree trunk. I could imagine the deer using its lower front incisors to scrape up the tree. Deer, cattle and sheep, as you will know, only have incisors on their lower jaws. The upper jaw has a dental pad. Beavers, on the other hand, have teeth on both lower and upper jaws and so do a much neater job when they need to cut something.
The other cutters on the banks of the Tay were the humans. So that fishermen can cast a fly without getting caught up in the vegetation of the banks, the riparian woodland is cut. Biologically this must be a bad thing because it deprives invertebrates of habitat and thus little fish of their food. It also deprives beavers of food until these bankside willows coppice and sprout young shoots. 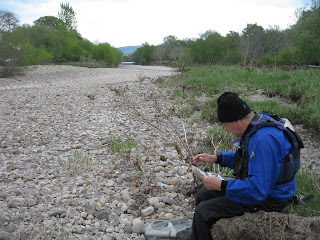 We stopped for lunch on this island. The water level was very low, so what would ordinarily have been a water way was a bed of gravel. 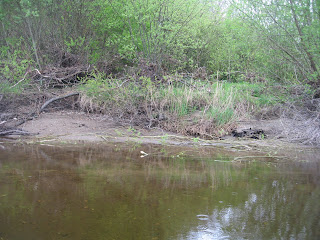 We saw the first undoubted signs of the presence of beaver by the golf course just below Aberfeldy. This photograph was taken a bit downstream of the golf course. 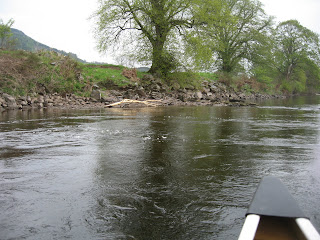 And here is another one - a branch has been stripped of its bark.
There were plenty of signs of beaver down to Edradynate, where we landed.
The journey was memorable, partly for the signs of beaver, but also for the beauty of the landscape and the abundance of swallows, sand and house martins. Dippers flew and goosanders and mallard went about in their pairs and groups.
There were fishermen, bent over their rods, whom we avoided, but to whom we waved friendly greetings. And mostly the waved back to us.