Autumnal Developments in the Wet Wood

The autumn rains have fallen and now the first significant frosts of winter have turned the landscape white. 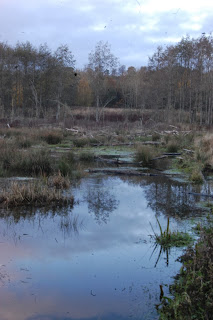 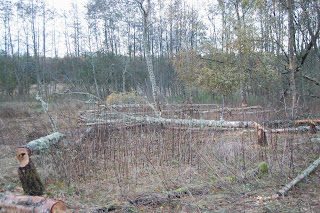 Preparations for winter continue. A fair number of birch trees have been felled in this corner of the Wet Wood. 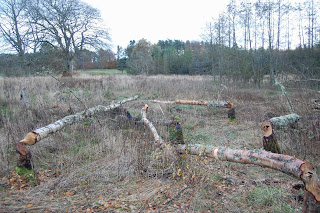 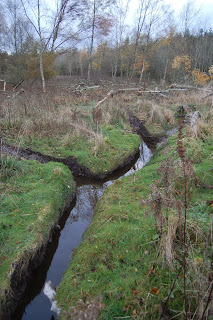 This canal has been extended out of the pool created by the dam in the photograph below.

You can see the branch canal off to the left of the picture and what may turn into another tributary further back and to the right. 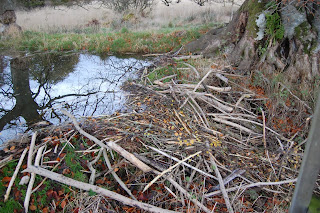 This dam was first built in autumn 2004, but neglected for a long time. As you see it is now being built up again.
Posted by Paul Ramsay at 20:33 No comments:

A Jaunt to Hungary - A Visit to the Hortobágy National Park

This time a fortnight ago I was in Hungary with friends to see the migration of cranes. We landed at Budapest Airport, stayed the night in that city and drove on to the Hortobàgy National Park the next day. The Hortobàgy is in the Great Hungarian Plain. 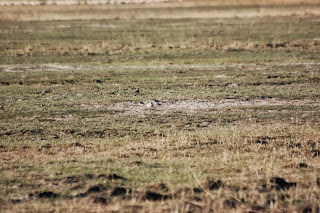 You may wonder what the subject of this photograph is. Indeed, it is hard to make out the couple of dotterels in the photo, but on reflection the picture does give a reasonable idea of the heavily grazed puszta of the Great Plain of Hungary. As with us there was a long and droughty summer. The area of lightly grazed steppe is much reduced and wherever the soils are deposits of loess they are cultivated. We saw sunflowers, maize, barley stubbles (cultivations were going ahead under clouds of dust), alfalfa.
What made the dotterels more difficult to see was that they were mainly but not completely in winter plumage. Of course it is one thing to see birds through a telescope and another to pick them up with anything other than a very long lens. 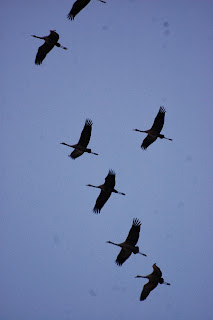 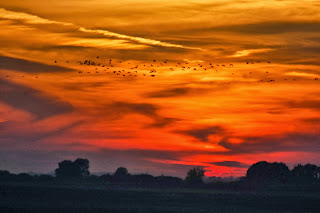 This was the view to the West from an observation tower. 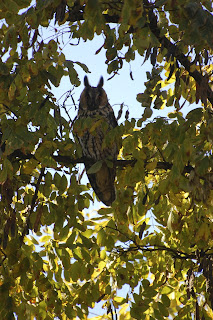 Near our hotel in the the town of Balmazújváros there were a couple of trees in which about seven, perhaps more long-eared owls were roosting. What a wonderful chance to see them!

The rains are here at last. The water levels have risen and pools that were dry all summer are now sparkling with water. 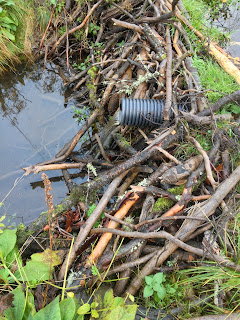 The summer is truly past, though the weather is still surprisingly warm.

This is the time to look back over the rush that was the summer and take stock. Louise has written up the contents of the Visitors' Book we started for people who came here to see beavers.

The summer of 2013 was a good one for beaver visitors at Bamff, and the beavers themselves were very obliging too, appearing to be viewed, photographed and filmed to the satisfaction of many.
The first visitors were in early May, and they were Jason Clarke and family of Cool Cottages, who were delighted to see a beaver and wrote a great review for our holiday cottage here: http://coolcottagesscotland.com/the-cottages/family-fun/old-brew-house/.  After that we had Mark Thomson the Dundee vernacular poet and his partner Rachel plus wee lad Billy,  and step-daughter Annie and her partner Brian came on 17th May.  Here is Mark’s website:  http://www.markthomsonpoet.co.uk.  Some of the party saw beavers, but it got a bit late for Billy.  In the end Mark came back another time.  He says “Yep I did see them not with billy though I came up with a mate of mine and we seen 3 of them and 7 wild boar, whut a result to think they are just up thi road from kirriemuir. Is amazing, eh am so gled that eh met you guys an gave me thi opportunity ti see these magnificent animals.” Thanks Mark, and thanks for writing in the Scots vernacular. I wish more people did that.
Soon after that there was a visit of 50 students from Napier University who came for a daytime visit to see the habitat. Rachel Mitchell, a post graduate ecology student at Napier who is the daughter of Andrew Mitchell, our neighbour who is also the Bamff farmer, came with the group and assisted Paul in showing them round.   Not long after that a group of 23 came from Dundee Naturalists’ Society came one evening. Paul took them down to the pond with the telescope and, in spite of being such a large group, they were quiet enough to see several beavers.

And that was when I started keeping better records.  The next group, on 29th May, were Wildcru from the University of Oxford http://www.wildcru.org – Dr Roo Campbell, Dr. Christos Astaras, Kirsten Bilham and a group of seven PG Diploma Students from the course in International Wildlife Conservation Practice.  This group came in daytime and reported having seen dams, felled trees, beaver lodges and tracks, voles, frogs, and various small birds.  They were very impressed with the landscape engineering, and generally felt it was great. All this group felt that legal protection would be needed at least until the species was re-established. 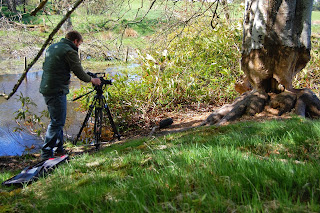 Charlie Nash spent several weeks of the summer, from 12th May,  making a beaver film at Bamff.  Charlie is studying Wildlife Film Making at the University of the West of England in conjunction with the BBC here: http://courses.uwe.ac.uk/D4P31/ and he chose to make his film about the Tay beavers. He based himself at Bamff for a fair bit of the summer, doing some volunteering in exchange for accommodation. The short film is now complete. It’s called ‘Beaver Fever’ and shows both sides of the debate, but does end up being more pro beaver than anti.  This is greatly helped by the wonderful footage of beavers and other wildlife which would make anyone want to have beavers.
There were a few more visitors after that, one of whom, Patrick Cooper, reported seeing 4 beavers (we think) and a herd of wild boar. The comment in the visitors’ book was “inspiring for the future of British wildlife, and the overlapping of farming, ecology and farming.”
On 26th May we had a visit from a group from Baldragon Academy in Dundee. This small group, brought by their teacher David Wharton, had the good fortune to see not only beavers, but an otter hunting ducklings.  A first for us all! This was recorded on their own school radio programme.
Soon after a group of 13 volunteers came to stay with Donald McPhillimy, to do work in the woods, and their visit was enhanced by beaver watching. Most of them were lucky and had a sighting or two. 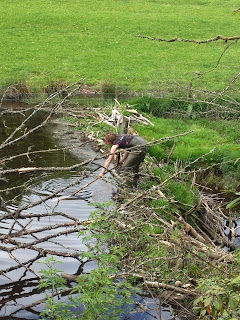 A third/fourth year student called Izzy Tween from St Andrews University spent some time camping at Bamff this summer while she conducted a survey of invertebrates in beaver pools and streams for her undergraduate dissertation in zoology.   She saw plenty of beavers in the course of her various visits.
On 4th June Tim Fison came with six members of the Aberfeldy branch of SWT, and had another good evening’s viewing.  The next group were relations, Robert and Cat Berry and they saw a few beavers and an otter. Cat wrote that this was a “much needed antidote to London. Very special indeed.” Next on 19th June, came Alasdair Gordon Cameron, a writer who is interested in rewilding came on 19th June.  He saw beavers and boar, and wrote “Fantastic – you have created something really wonderful.”  I have to say that I think the credit actually should go to the beavers, who have done all the hard work.  Next was a young Dutch volunteer worker, Brett Van Weeren – who was delighted to see beavers, deer and boar.  He said it was “Incredibly lovely! They seemed to live so peacefully.” Diane and Jan Hastie, saw deer, little grebe and blackcap, and Fi Martynoga, as Scottish Writer (http://www.amazon.co.uk/A-Handbook-Scotlands-Wild-Harvests/dp/1887354964)  saw roe deer, woodpeckers, dabchick & blackcap.

On 11th July we have our first recording of kits being sighted. Alison Handoll reported seeing two adult beavers and one or two kits. Sameena McMillan (on the same evening) saw an otter family walking on the path about a metre away. David Wilson (Freelance TV Producer/Director) went out late in the evening of the 19th July and saw three beavers and two rather surprised otters.
Jean Pierre Choisy, French Ecologist, involved with the reintroduction of vultures, ibex and chamois to the Vercor in France, and his daughter Elise and son Floris saw all three age classes of beaver (adult, sub-adult and kits). He wrote how remarkable it was to see the ponds created from a little stream with development of habitat for trout, water birds, and aquatic plants etc.
There was another large group on 2nd August, and the visitors kept coming through September as well. On the week-end of 5th/6th October Reforesting Scotland www.reforestingscotland.org held its annual conference in the Alyth area, and I took a large group round the beaver wetlands on the afternoon of 5th October.  Of three possible outings, the Bamff beavers (and other Bamff attractions, including Community Tree Cycle) proved overwhelmingly the most popular. Later there was a discussion in the Alyth Town Hall about re-wilding. A range of interesting views were expressed.  The way that beavers can re-wild the riparian corridor, even in an agricultural or urban landscapes greatly appealed to many of the members and there was widespread enthusiasm in spite of the beavers’ tree cutting habits. Members understood that tree cutting is not the same as deforestation.
And the visitors have kept coming. Even this week we have some Dutch people in the cottage who are interested in seeing beavers, but as it’s so late in the year, they have so far only been able to hear them. 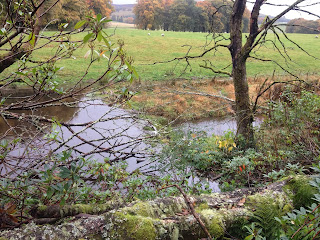 The first big dam along the Burnieshed below the drive is back into overflow mode. 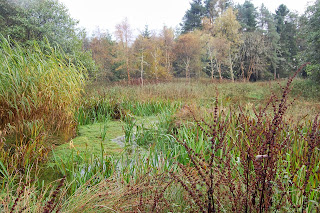 Over at the Wet Wood the ponds are filling up again after a summer of drought. 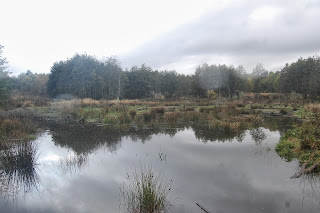 This pool, bounded by the Longest Dam, has refilled with water.