Exit to the Field

After watching the Big Pond for beavers and seeing only one, I noticed some ripples in the water below me. A moment later I realised that I was looking at the big male. He lay quietly in the water for a moment and then, by the time I had found him in my camcorder's viewfinder, he was devouring sedge.
I wrote those words some time ago and since then days have elapsed as I have tried to load the video that I had recorded of the beaver grazing on the sedge and marestail. Unfortunately, the video never completed its transfer into this blog and I remain frustrated.
This is now the 29th August. The wind is in the North-West and blowing briskly. Willowherb seeds are flying past the window of my office as I write. The weather has turned colder, though the sun is bright, and frosty nights will soon be with us.
The beavers are active cutting birch again and stripped twigs and bits of branch are evident in the water.
Last week Andrew Mitchell had the endriggs of some of the barley fields cut and baled as a fodder crop for the stock in the coming winter. By the burnside I noticed that the mower had avoided this: 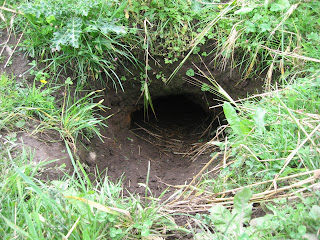 Duncan Halley wrote from Norway to say that a beaver had been reported near Invergowrie in the 'Daily Mail, but that he could not find it.

In a later email, he gave links to articles that had appeared in the Dundee 'Evening Telegraph' (http://www.eveningtelegraph.co.uk/output/2010/06/10/story15202472t0.shtm) and 'The Courier' (http://www.thecourier.co.uk/Living/Outdoors/article/1810/wildlife-enthusiast-spots-beaver-in-invergowrie.html) and soon afterwards I found the Daily Mail article at this link: http://www.thefreelibrary.com/Damming+evidence+as+beaver+goes+on+the+run-a0228881585

In the meantime the beavers at Bamff have not been inactive. Here is a photograph of a new dam on the Burnieshed burn: 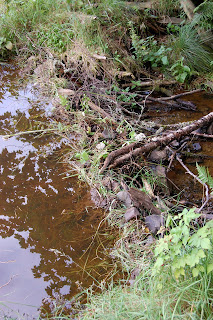 In the near ground you can see how the beavers have used stones in the construction of the main part of the dam. A little further out a branch has been laid as a buttress to support the dam against the pressure of the water. 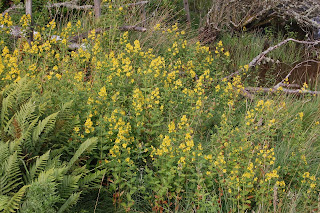 The Yellow Loosestrife has flourished this year and has spread into the silty edge of the pool just to the East of the drive. 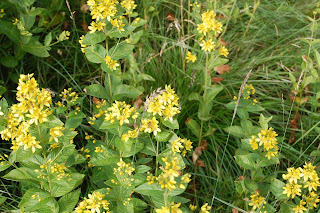 A hover fly is right in the middle of this picture, unnoticed until I downloaded it onto iPhoto.
Posted by Paul Ramsay at 18:33 No comments:

Congratulations to the Knapdale beavers!

BBC's Radio 4 News programme announced the arrival of two new kits, born to the Knapdale beavers, with a flourish. 'First beavers born in the wild in Scotland…' etc. or words to that effect.

Well, congratulations to the beavers of Knapdale! Unfortunately, as my readers will know, the claim that they are the first to breed in Scotland for all these years is fallacious. I think that this spurious claim detracts from the relief we must all feel that the trial is flourishing, despite some anxieties.

Here, by way of a reminder, is a video clip of the beaver kit I filmed last July (2009) in a tributary of the River Tay. Aficionados of the beaver will know that, apart from the difference of size, beaver kits sit much higher in the water than adults.

A Beaver Kit in the Big Pond 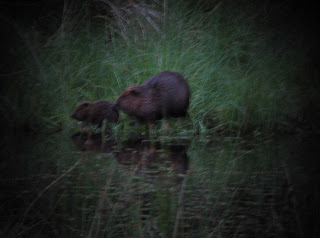 Here is a beaver kit with an adult, perhaps its mother.

We watched the mother grooming the kit and then leaving it to swim and feed. The kit groomed itself while we looked on, entranced. 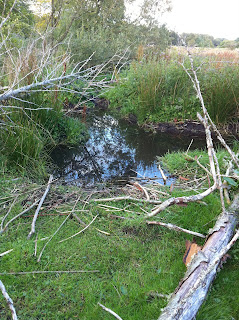 This evening I walked through the Wet Wood and photographed this well-used feeding station. On the far side of the little pool is a long, low dam that runs for about one hundred metres. Upstream of the pool is a short canal that leads further into a willow wood.
Posted by Paul Ramsay at 19:40 No comments:

An Article in 'The Scotsman'

'The Scotsman' of 6th August 2010 published an article based, it seemed, on the report of a photographer, Keith Ringland, whose night photo of a beaver accompanied the article. According to Ringland there may be about one hundred beavers in the Tay catchment and they range as far as Forfar in the East and Strathearn in the West.

The article is to be found at http://thescotsman.scotsman.com/beavers/Gonna-gnaw-dae-that-.6460769.jp, complete with some absurd remarks that purport to come from a representative of Scottish Natural Heritage.

According to SNH's spokesman "There is an animal welfare issue because they are sociable animals but their welfare is not being monitored." Of course this is very sad, but it is one of the facts of nature that the young adults of many species, including the beaver, must disperse from the parents' territory and find territory for themselves, and a mate. While on this search there may well be a period of solitude.

On the basis of their solicitude for the beaver, I wonder why SNH is not monitoring the welfare of the young adults of other species: what about young roe deer as they travel through our hostile landscape, or young water voles as they make their way in the world?


Here are a couple of photographs, taken by Alan Ross. 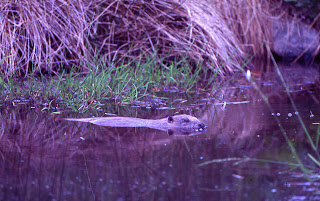 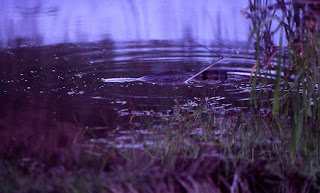