More about Dams and Something about Trail Cameras 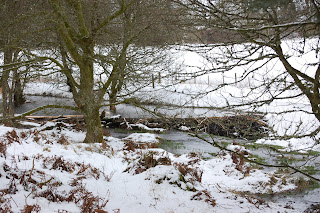 I took this photograph of the Lowest Dam on the Burnieshed Burn in December 2008. 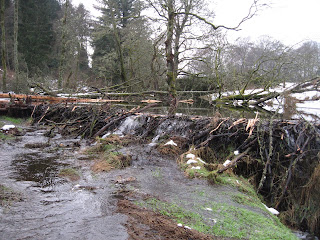 This photograph, although taken from a different angle shows the dam as it is now. I took the photograph ten days ago on the 21st of January.
An interesting aspect of the changes that are taking place on this burn is the increased sighting of dippers (Cinclus cinclus). 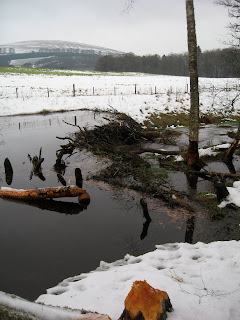 Here is that dam again. 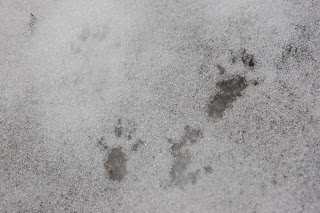 What have we here? A squirrel, I think.
I have been setting my trail cameras this winter, but haven't had much success with them. It may be that the beavers are more suspicious of that pink light as the infra red is triggered. Besides the one or two successes that I have had seem not to have made it onto YouTube. Do we lack ban width?
It is high time that I published this post, so here we go.
Perhaps my cameras will show some good results when I inspect them next.
Posted by Paul Ramsay at 11:41 1 comment:

That slide again and signs of the thaw 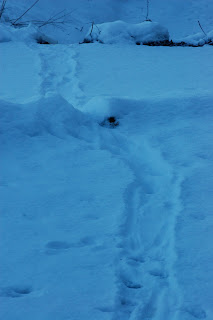 Here is another photograph of the otter's slide. The thaw is with us now and the beavers are back at work. 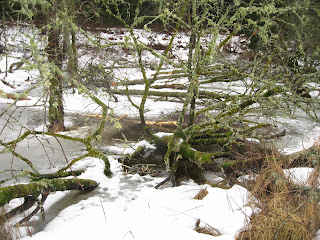 The beavers are busy stripping the bark from trees they felled in the autumn. You can see some freshly stripped tree trunk in the middle of the picture. 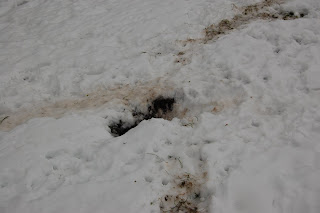 The moment the thaw got under way the beavers at this burrow began to go out and about again. 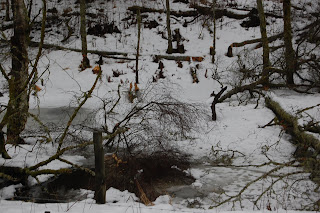 A bit Breughelly, but where are the peasants?
Posted by Paul Ramsay at 19:21 No comments:

Open Water and Beavers in a Time of Freeze - Otters slide. 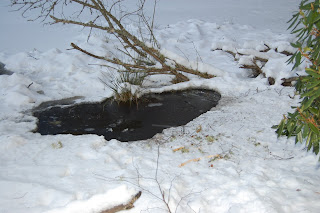 The recent ban on wildfowl shooting in Scotland by the Scottish Government highlights the difficulties that wildlife suffers in times of extreme frosts.
It is one of the many advantages of the beaver that it keeps open holes in the ice for some time after the rest of the water is frozen over. Here is one such hole by a lodge.
There is a skin of ice of two thicknesses: the one in the middle of the hole having been broken the previous night, perhaps. In the snow to the right of the ice hole are some stripped twigs. 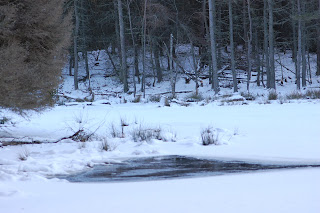 And here is another, more extensive area of freezing over water in the wider ice-scape.
I photographed this from the lodge a week or more ago when one of the shots showed a canal in the ice over to the other side of the pond.
Gradually the open water is icing over, but long after the rest of the pond has become icebound. 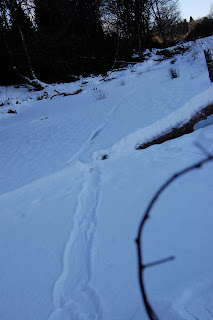 Now what is this? Could it be an otter's slide?