A Perambulation along the Baikie Burn 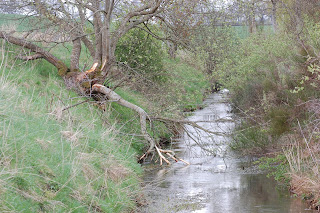 This afternoon I loaded up my Bavarian trap and set off with it for the Hole of Ruthven and the Baikie Burn, which flows nearby down into the River Isla.
I first learned that a beaver was active in the Baikie Burn about last Christmas and went and had a look with James Ivory.
James showed me three trees that had been gnawed or felled and I offered to return with my trap.
But I had lent my trap and the weather made it difficult to head for Strathglass to reclaim it. Besides, I had misgivings about trapping beavers, newly returned to the wild.
Time went by and an unpleasant exchange of words with James's brother, Ian, led me to think that it would be better to take my trap to the Baikie Burn and see what happened.
The photograph above shows what I saw after the three trees that I remembered from my earlier visit. As I walked along the path by the burn I saw more and more similar signs of activity. 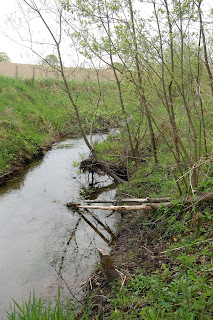 In due course I turned back and went a little upstream beyond where I had left my truck. There were still signs and that leads me to believe that the whole length of the Baikie Burn is occupied by at least one and perhaps another family of beavers. 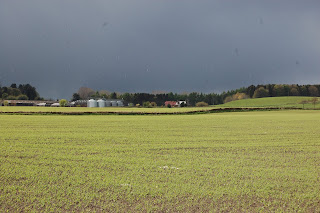 The Baikie Burn, Dean Water and other streams and rivers are narrow ribbons of relative wild in this wider landscape of monoculture.
The farm in the distance with its grain stores is Islabank.
Posted by Paul Ramsay at 21:21