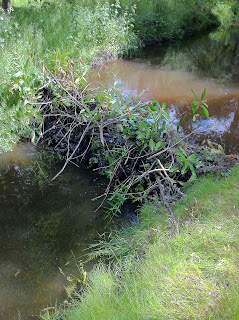 The new dams by the drive have been creeping up and with the rains of last week, the beavers felt obliged to raise them still further. They have crowned this dam with rhododendron, brought down from the bushes upstream.
The height of the water level upstream began, however, began to present a potential problem for the drive. We do not want the drive to become a water course and, by means of cuts in the side of the drive have been carrying out work, familiar to anyone who maintains roads, of taking the water off the road as soon as possible. 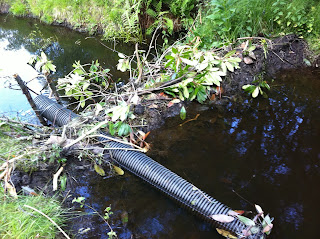 Therefore, we have taken this opportunity to instal a pipe through the dam. The perforated polythene pipe is fixed at both ends and wire mesh covers the upstream end to prevent beavers blocking it. 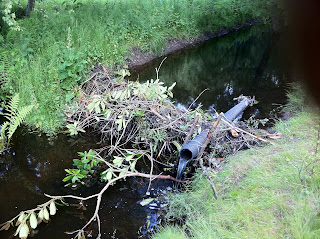 Paul Scott and Alan Ross came here last Saturday to carry out this work. So far it has proved completely successful and the water level of the stream upstream of this dam has been reduced by about 4 inches (100 mm) as you see from the tide mark in the photo.
Posted by Paul Ramsay at 12:57