After feeding the wild boar down the drive this morning I thought it would be time to remove the trail camera and see what activities it had recorded during the last week.
Here is what I found: 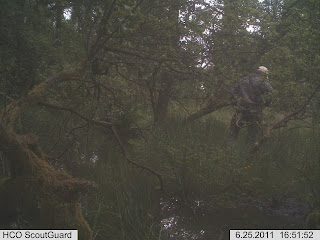 Disappointing, really: however, yesterday evening I walked out with my camcorder. I walked along the Burnieshed path and stood behind a patch of ferns. The wind was from the North. The five adolescent mallard ducks swam by me in single file and settled down to feed some distance upstream. A beaver climbed out of the water on the opposite bank and began to graze.
It did not settle, though, and turned back to re enter the water. I watched it swim about for a little and then land on the bank near the dam. It settled there and grazed for some minutes. While this was going on another beaver appeared where the first beaver had started feeding. It was rather bigger than the first beaver, so I took it that the new beaver was the female and that the first one was her mate. For while they grazed. Occasionally the water near me stirred. I wondered about trout. There was a sharp, short splash sound at one point and the bigger beaver looked up. What's up with you, I thought to be disturbed by that - probably only a trout. She went on grazing.
Then the first beaver took to the water again, circled around a bit near the dam and made for the bank where his mate was feeding. Suddenly, there was a lot of splashing and what I thought sounded like rather aggressive activity, out of my sight, behind the rushes that fringe the burn. Odd, I thought, are they playing together? And then, but was it then, I saw the otter. It ran off. The beavers rushed into the water swam about, met each other and rubbed noses and then headed off together at speed. I lost continuous sight of them as they disappeared behind the fallen fir in the pool. They gave long keening cries. A short while later they turned back a returned to view, but not before the otter, joined by a second otter, ran out from behind the rushes. One of the beavers rushed out of the pool and the otters fled, chased by the beaver.
After this the beavers patrolled the pool vigorously. The wind had veered a little to the East of North. I thought, 'Now the beavers will get wind of me'. One of them swam across the pool about thirty yards upstream of me, followed the scent downstream and faced me, sniffing about. It got a good contact and crash-dived.
What a fascinating experience! I think the otters must have been waiting around in the hope of attacking a kit and the beavers were probably aware of this for some time. I had not heard the single keening warning note before.
http://www.youtube.com/watch?v=phdDrSIK5fg
Posted by Paul Ramsay at 14:49