Late Winter at the Bamff Ponds

March is late winter and, on a grey misty day, doubly so. I took a walk round the two ponds. 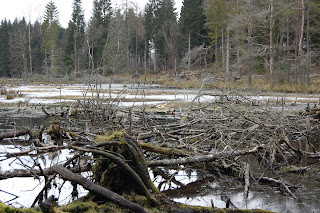 A surprising number of pairs of mallard took off at intervals as I walked along. The wild boar stampeded out of a muddy wallow, bellowing indignantly. This mass of dead willow looked like an ossuary, its neglected bones scattered around.
You can see that there is still a skin of ice on the pond in the picture. Weeks of freeze by night, followed by thaw by day have left an enduring crust. 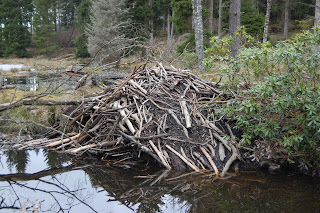 I was nearing this lodge when there was some turmoil on the water and a small beaver swam off down the canal that separates the two ponds. 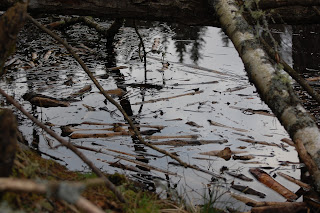 Perhaps it would return? I changed my camera lens to the 70/300 mm and waited. I became impatient after some minutes and took this photograph of the detritus in the canal. Masses of barked bits of birch and willow branch about six inches long (16cm).
I stood up and moved on quietly. About one hundred metres on, at the next drain outlet into the pond, there was a commotion of the water. There was the beaver, one of last year's kits. It was inattentive enough to allow me to get to within about ten metres of it and I took the following photographs as well as several others. I was surprised it did not seem to mind the clunk of my camera's shutter. Perhaps its desperation to feed made it lose its caution? 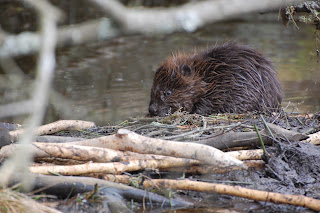 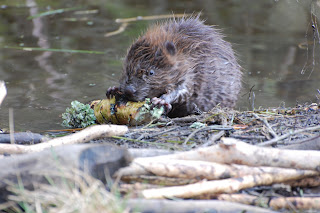 It was good to see this young animal so clearly and to watch it grasp the sticks of birch with forefeet.
Above all I was surprised at how small the beaver was. Kits weight around 450 grammes at birth and then put on a lot of weight through the summer, first on their mother's milk and then on vegetation, but it must be the case that they do not grow during the winter, particularly a hard winter. Spring finds them at much the same weight as they were the previous autumn.
Where is my copy of Müller-Schwarze and Lixing Sun's 'The Beaver: Natural History of a Wetlands' Engineer'? There is information about this sort of thing there.
Posted by Paul Ramsay at 16:58