Roseanna and the Frog

A few days away and then back to a milder Perthshire, we missed Brian Taylor's Big Debate on Radio Scotland, but I have just listened to it on iPlayer.

I find Roseanna Cunningham's arguments increasingly thin. She claims to take the advice of scientists, but which I wonder, and haven't their arguments about the right sort of beaver and so forth been discredited? In the past she has spoken about democratic processes, but were these not covered by the Scott Porter public opinion survey work of 1998?

And then, as Roger Crofts (former Chief Executive Officer of SNH) pointed out at the Scottish Wildlife Trust talk in Edinburgh on Tuesday, 15th March, what other country has gone in for a 'trial' such as the one in Knapdale: a meaningless project from the point of view of finding things out about beavers that are not already known in the matter of the species's restoration to this country? None is the answer.

How would you carry out an 'exit' to the release of beavers in Knapdale when you had taken money from charitable organisations and persuaded thousands of school children of the necessity of the return of beaver? Imagine turning round and saying, 'Our project has failed, so we want rid of these beasts. The Norwegians don't want them back, so we are going to have to kill them.' How absurd!

I am glad there are beavers in Knapdale and wish them every success, but it would be good if their minders  allowed their charges some space and stopped treating the beavers as though they were in a zoo. 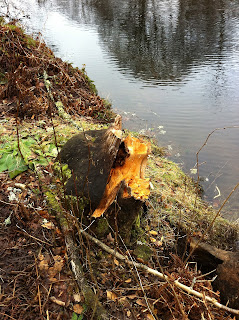 While we were away one of the sycamores that the beavers ring barked three or four years ago fell. 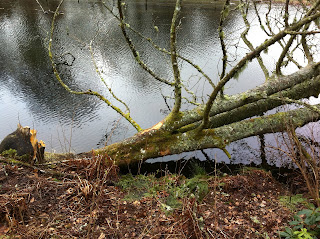 There are a few marks of beavers' teeth to show that they have thought it worth trying the bark. 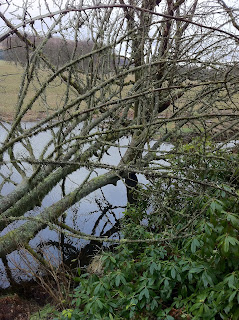 The fallen tree is leaning against another ring barked sycamore. This tree will fall over the dam near it. What will happen then? 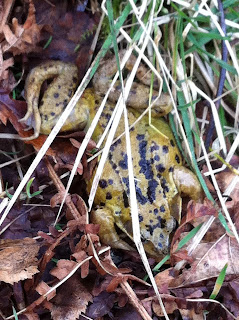 This big frog jumped slowly across the path as I drove back from feeding the Burnieshed family of wild boar. It stopped by the side of the path and I was able to dismount and take some photographs of it.
Posted by Paul Ramsay at 13:25