Floodplains and their anxious Owners

These photographs are of a stretch of the River Isla a little to the south of Alyth. This bit of the Isla is occupied by a family of beavers. Much of this length of the river is bare of riparian woodland. The beavers have settled on the south bank, where there is some patchy willow scrub. 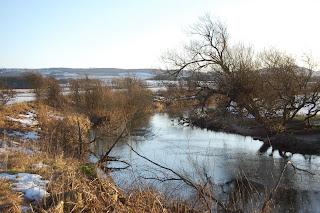 On the left of the photograph is the south bank. The tree on the north bank is one of the rather few on that bank and may even be one of those felled by the beavers this winter.
The photographs below were taken last week, when the weather was mild and wet. 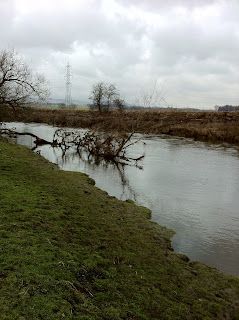 This photograph was taken from the north bank of the Isla on Grange of Aberbothrie, a farm belonging to George Fleming. Beavers have cut down one of the few trees on his side of the river and provoked outrage. George claimed that this tree would be carried down river and finish up, lodged against a bridge, which might collapse in the event of other large woody debris forming up against it as well.

Unfortunately, I didn't take any photographs of the opposite bank. There are a couple of places where the flood waters blew out the burrows that beavers had been using. The Fleming view was that these breaks in the bank would render the whole flood bank on that side of the river liable to collapse and then the inundation of hundreds of acres of farmland. Others have suggested that these burrows are filling up with sediment already and that the flood banks themselves have a core of stone that is unlikely to be broken through so easily.

This simple controversy brings up so many questions. From the point of view of present day agriculture the soils of the flood plain are excellent silty loams in many cases and have to be protected from floods. From another point of view these bits of flood plain should be turned over to nutrient farming and the reinstatement of wetland with all that that means for the restoration of wildlife and wilderness. 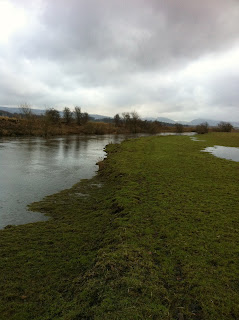 I asked George if he had thought of planting this ground next the river with willows. He keeps this area of river in permanent pasture, recognising that the annual intrusion of flood water makes it too difficult to crop. Unfortunately, the grazing of cattle erodes the river bank and there are places where it is collapsing into the river. Having said that this stretch of eroding river bank is no worse than a great many stretches of river bank throughout Scotland. Nonetheless, it is symptomatic of the degradation of so much of our riparian habitat. The memory of my visit to Oregon reminds me that what they lost in 150 years, starting in the 19th Century, our ancestors had achieved around 1000 years ago. A reading of Professor Callum Roberts's 'The Unnatural History of the Sea' - Chapter 2 (Gaia Thinking 2007) is instructive.
In the 1990s the WWF set up its Wild Rivers' Project with its intention of restoring Scotland's degraded rivers to some of their wild state. I wonder what became of the project. And what became of SNH's plan to encourage riparian planting around the year 2000?
The present SRDP has as a priority in its environmental section the planting of riparian woodland. I wonder how much success this is having. I should find out. 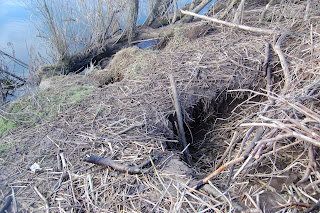 This was a burrow that had been flooded and abandoned by the beavers. 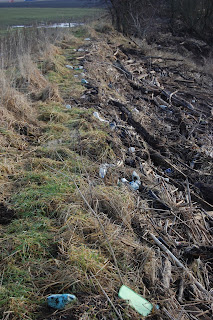 Here is some really amazing debris from the floods earlier this winter. What quantities of plastic bottle and cans!
Posted by Paul Ramsay at 21:55