An email from George Fleming and some other thoughts

You never know who is reading your blog, so here is an email from George Fleming of Grange of Aberbothrie:
Morning Paul, Read your blog--and the Times. Like Ian Ivory, I have no intention of allowing a cull on my land, with any luck they have moved on and the problem with it. Your article is slightly misguided in the facts that it is not one tree , but several, and there is a lot more damage upstream. The burrowing is of more worry to me than being 'outraged ' at having to clear up debris--I do this every year even BB  --before beavers!I have grave doubts that the large burrows will fill up themselves--I hope I am proved wrong--. I totally understand your need to get the law in place to give power to relocate them to places more suitable and more acceptable--and in that I wish you luck. ps--I do not allow cattle to graze my banks, I use sheep which firm up the banks--perhaps that's why I have only had one breech in 30 years. There may well be a place for the beaver in Scotland, which is acceptable to the surrounding area, I do not think it is with me! I wish you and Louise well, and I am sure the powers that be will come up with some sort of compromise--that's the way of politics! Regards, George 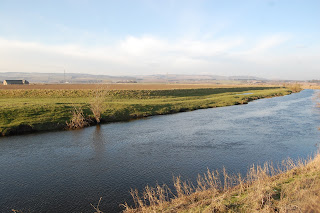 So, here is a view of the bank of the River Isla on the Aberbothrie side. It is grazed by sheep, as George says, 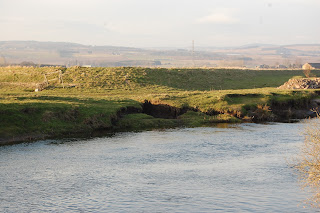 but is still prone to collapse, which might be avoided if the bank was protected with riparian woodland. It has to be admitted, however, that the establishment of riparian woodland, where flooding is common, is an expensive and difficult business. 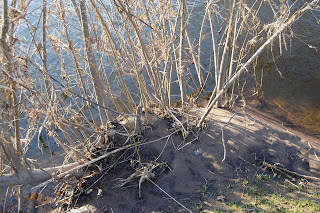 The willows in this photograph, taken on the south bank of the Isla are trapping sediment, which would otherwise be washed downstream, eventually to be deposited and clog up gravels where salmon might breed.
Posted by Paul Ramsay at 22:09