The Scottish Game Fair at Scone

Early July and the calendar turns to the Scottish Game Fair at Scone.

My daughter, Sophie, grandson, Adam, and I made it along there on Sunday afternoon. Rain had poured down since the night before and we took waterproofs. However, when we arrived the sun was shining and with it a welcoming warmth, so we left our waterproofs behind in the car.

Hardly had we entered the main area of the Fair than huge, black clouds blew in from the west and towered over us. Spots of rain fell. We looked at each other and regretted our folly. No time to go back to the car though, so we hastened towards booths that looked welcoming.

Such a one was this one with its furniture made of the antlers of red and fallow deer. 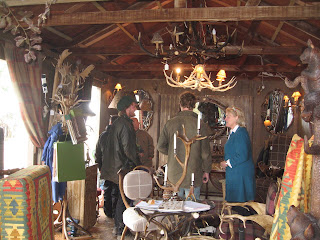 Before we had reached this haven, we passed by the Game and Wildlife Conservancy Trust's main exhibition, which was the same as last year in its emphasis on the desirability of killing any animal that might like to eat birds that humans like to shoot and eat. 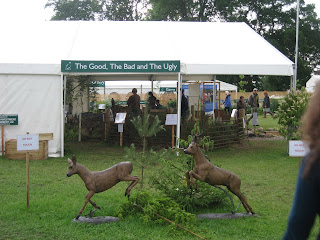 Adding in, as this photograph shows, animals that do things to commercial forestry. I agree that we need to control the numbers of deer so, as we have driven the native carnivores such as the lynx or wolf that did some of the job to extinction, we have to do it ourselves. 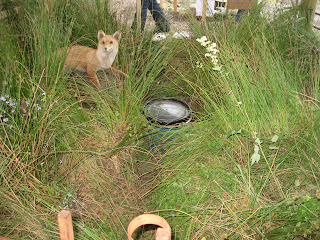 I always think that this device for luring foxes to their death is a particularly unpleasant one. Inside the plastic barrel, which must be kept shut for reasons of health and safety, are the decaying remains of other creatures that have been killed for whatever reason, and the fox is lured towards this, but has to make its way along paths on which snares have been set. 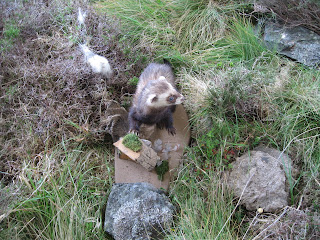 Among the Good, The Bad and the Ugly on display, I noticed this stuffed polecat (Mustela putorius).

Polecats, along with other Goodsbadsanduglies, are protected, but they belong to a species that is extending its range after being driven almost to extinction, and this is something that some shooting folk do not like.
Posted by Paul Ramsay at 13:21