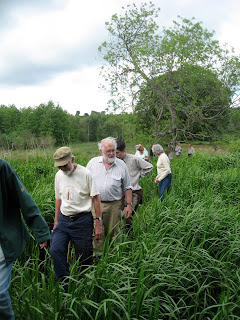 Last Thursday the Mid-Scotland Region of the Royal Scottish Forestry Society met here. This photograph shows some of the group using a beaver dam as a causeway. The first figure you can see is Richard Toulmin. He is followed by Chris Badenoch, our new President. I can't make out the others, but  Jeremy Thompson's son is the young man behind Chris.
A dry spring has been followed by a dry summer. I have meant to record the falling the water line for a while, but yesterday it looked as though I might miss the opportunity, as a shower of rain and thunderstorm looked as though they were harbingers of the end of the drought.

Here, then, are some photographs:

Here is the pool below the drive. The carpet of green is Water Starwort (Callitriche sp.). Nearer to the camera the leaves of a pond weed (Polygonatum) show through the outliers of Water Starwort. 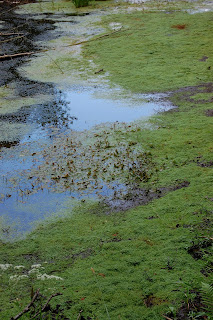 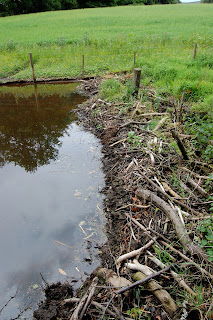 The next shot shows the downstream side of this dam. A little water trickles through to form a small pool in the bed of the stream. 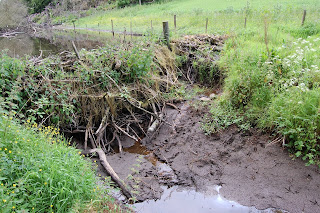 Looking upstream from just below the top dam you can see the overflow gap in the dam. 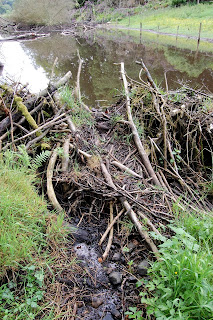 Looking down towards the middle dam. 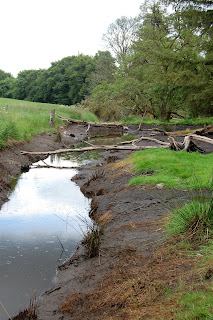 And here is a photo of the same stretch of the burn, though taken from a slightly different angle back in March.
The drought enables one to see where beavers and other creatures have  been digging burrow below the normal water line and the exposure of the fertile silts enables water plants to seed and germinate - as with the Water Starwort in the first photograph.
The dramatic and sometimes short lived changes emphasise the dynamic nature of streamside communities. 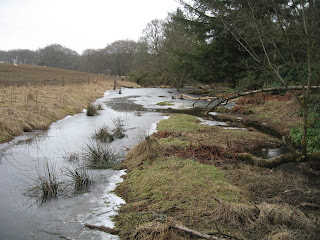 Luxuriant vegetation gives the lie to the low water levels.

The tumult of regenerating birch in the right of the picture resulted from the storm blowing of a large oak tree. 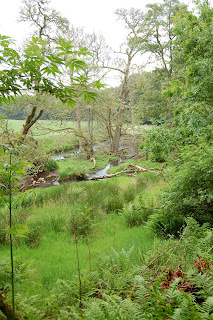 The increased light,  resulting from the felling of trees and the falling of a couple of big old conifers made unstable by the water logged conditions, has given rise to an explosion of vegetative growth. 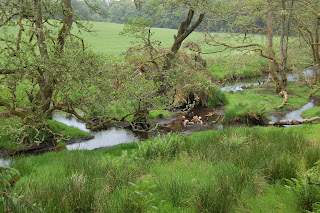 The lowest of the three big dams has kept the water level of the pool it has created relatively high still. 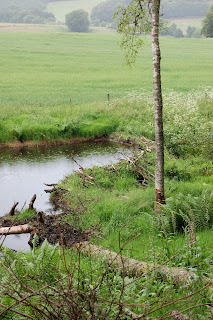