Wood Wasps at the Big Pond

Some years ago Andrew Barbour came here with some of his family to visit beaverdom. We walked round the Big Pond - an easier matter in those days before the beavers had really got underway with their reconfiguration of the landscape.

When we reached the manmade barrage that closes the pond Andrew wondered what would happen to the pond when the spruces that grew along the top of the dam fell down. I had no answer at the time, but here is one of several possibilities: 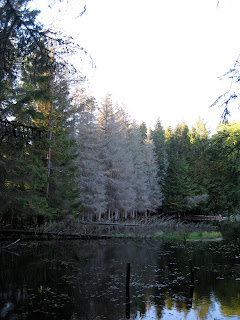 First, the roots of the trees are drowned, as has happened in the photograph on the left.

Next, they are invaded by fungi and wood boring insects such as the Giant Wood Wasp (Urocerus gigas).

This beast, of which I was reminded last week by seeing a couple, has a symbiotic relationship with certain wood destroying fungi (Amylostereum Sp.) - see http://www.aphis.usda.gov/plant_health/plant_pest_info/pest_detection/downloads/pra/ugigaspra.pdf.

Here is a photograph of a female Giant Wood Wasp that I managed to take with my compact camera last week. You cannot make out the long ovipositor very well from the photo, but many people find the sight of this splendid beast intimidating because they think that the spike is a sting rather than a device for inserting eggs into trees.

The trees in which Giant Wood Wasps like to lay their eggs are usually enfeebled by an already existing problem such as attack by a fungus (such as Fomes annosus), or a struggle with a difficult environment - such as poor soil conditions, flooding, or drought. 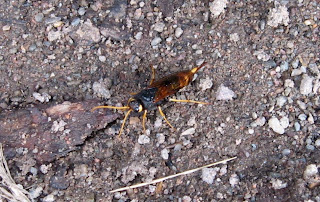 It seems that the Wood Wasp inoculates the fungus into the tree when she oviposits her eggs. By the time  the egg hatches and becomes a larva, enough of the fungus's mycelium has developed for it to become the infant wood wasp's food. The mycelium of the fungus rots the sap wood, which provides the larva with food.
In its prepared environment the larval wood wasp can crawl around, creating the  tunnels and galleries that are characteristic of it. 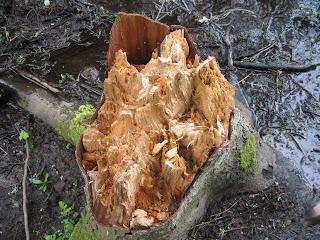 To go back to the barrage that closes the Big Pond: eventually the combined activities of the wood wasp larvae and fungi, weaken the dead spruce to the extent that it falls over, but without taking its roots with it, and the barrage retains its structural integrity. 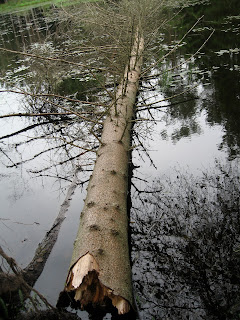 If you blow up this photograph you will be able to see the exit holes of the young wood wasp when it emerges as an adult.
Wild boar break open rotting logs in search of the grubs and larvae that they expect to find within. This is an interesting added dimension of the saprophytic complex that returns living trees to soil. 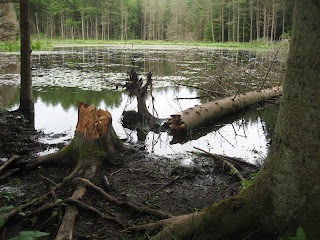