Release at Knapdale and a Paddle down the River Isla 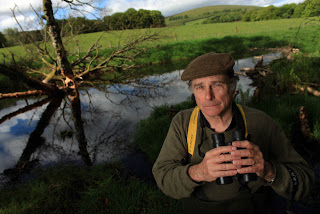 Here I am, minus Vari-shade spectacles so as not to look too sinister. The photographer from 'The Times', James Glossop, persuaded me to put on some chest waders and spend an afternoon as a foreground to some photographs to accompany an article in 'The Times' to note the release of beavers in Knapdale. This is the site that was chosen for a trial release of beavers to Scotland.
At last, beavers have been released in Knapdale, some in the presence of Roseanna Cunningham, Minister for the Environment and other things such as forestry in the Scottish Government. 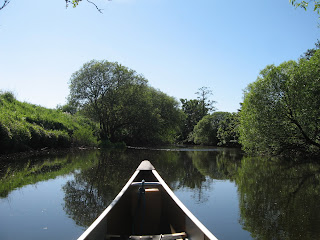 Yesterday, 30th May, I set off for my first solo canoeing journey of the year. I started at the Brigton, which is just below an unpleasant weir, and is now home to the Belmont Nursery, where people go and buy ornamental trees. A friendly mechanic said that it would be fine for me to set off from there in my canoe and leave my pickup in the car park. Unfortunaly, I left my GPS behind so I have little idea of where I took this photograph.
The water level was higher than the last couple of times I have canoed in the Isla, which, with the accompanying easterly wind, made it an easier paddle, though the water was shallow enough for it to be difficult to avoid grounding from time to time until the confluence with the Dean Water.
My original intention had been to canoe as far as the old Boat of Bardmony (a Boat in this sense was the Scots for a ferry, but the place has been bridged for quite a while now), but in the end I found myself paddling down to Isla Bridge, just before the confluence of the River Isla with the Tay. As I canoed I reflected on the suitability of these rivers for beavers. There were mute swans, bank martins, swallows, swifts, redshanks, sandpipers and some rather raucous warblers. I caught a glimpse of a kingfisher and saw several dippers, herons, but no osprey this time.