Some History - How did I become involved in this? 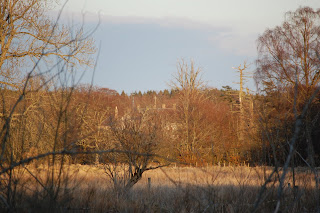 My practical interest in the restoration of wetlands began in 1981 when the remaining wet pasture to the west of Bamff House was drained along with a rushy bog.

Here is the pasture in question, looking east across the foreshortened damp/wet meadowland towards Bamff House. 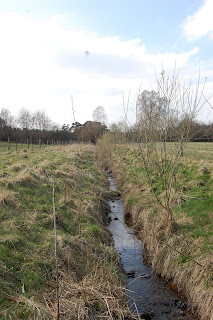 My grieve (farm overseer) at that time, Jim Duncan, told me that he had caught sea trout in this ditch some time in the 1950s. The fact that this had happened in what seemed to me to be a drying out landscape impressed me enormously and I resolved to restore the lost wetlands at Bamff as much as I could.
Gradually it became possible to turn things round – drains were broken in the rushy bog and willows planted to choke those that remained. I was able to get a grant from the Forestry Commission in 1992 for the planting of woodland for conservation purposes. Grey and Eared Willow were planted as well as (by mistake) some Grey Alder and birch.
Then, sometime in the late ‘90s there came the prospect that beavers might return to Scotland.
The European Union's Habitats' Directive of 1986 had urged member states to look into the possibility of restoring species of animal and plant that had become extinct in their countries.
Scottish Natural Heritage investigated the possibilities and were keen to carry out a reintroduction. They launched a public consultation and conducted a public opinion survey that gave a favourable answer to the question put. Unfortunately, though, SNH had not taken enough account of the reactionary forces they would unleash.
Fearful that this worthwhile project would fail, some friends got together and called ourselves the Scottish Beaver Network. We thought, at first, that we should encourage SNH and try to help them. Then, we thought that we might bring some Eurasian beavers into the country ourselves, keep them in large enclosures, and show people how beavers interact with their environment.
In March 2002 the first beavers arrived here.
Posted by Paul Ramsay at 18:18