Away for a few days and one of the first things to be done on return is to check the trail cameras. I had left one strapped to a branch and looking down on a feeding station. The best of the clips shows this beaver stripping a branch. You can see the way it uses its little finger as a human would use a thumb very clearly.
This month has been rather cold. At least that is what the grass is telling us. The sheep are grazing fields in which the grass is very slow to grow. By the stream in the beaver territory, however, the grass is growing lush, even where the beaver have been grazing and creating their lawns. The rafts of sedge in the Big Pond, on the other hand, look very much grazed. Is this because there are more beavers there, or is it because of the cold and late growing season? Perhaps both are true? 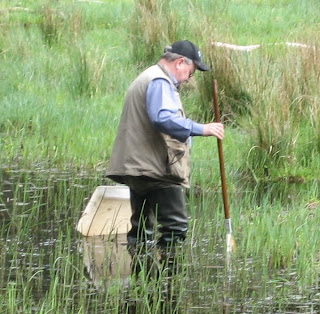 I arrived back home in time to find Garth Foster, who had come to survey the water beetle population of the Big Pond ("An lochan beag uaine" to my Gaelic friends) busy at his task.
Professor Foster asked me if the beavers had made much difference to the pond since 2002.
The answer is that they have raised the water level by about fifty centimetres. They have cut and sculpted the rafts of sedge, increasing the area of water relative to the sedge. I think that there is rather less yellow iris and bog bean than there used to be, but impressions can be very misleading.
Further back in their enclosure, the beavers have swum up the ditches that were dug to drain the Norway Spruce and have dammed them to create shallow ponds. As a result of some windblow in the winter of 2007, more light is reaching these areas, so it will be interesting to see how the vegetation develops. 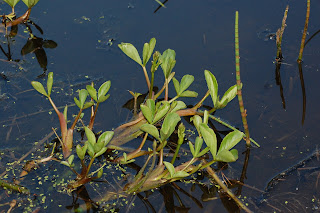 An exclosure that has survived since Kevin Jones erected it in 2003 is full of bog bean in
flower, but the bogbean round and about the exclosure is less thick and has fewer flowers.
The photo on the left shows some bogbean (Menyanthes trifoliata), which is about to flower. To the right of the bogbean are some stems of horsetail (Equisetum sp.) And what are the little blobs? Perhaps they are some kind of Lemna? 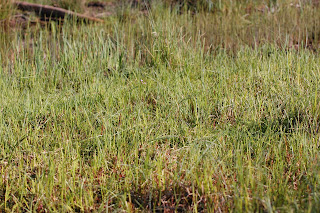 Here is a grazed over bit of sedge raft. Beavers can often be seen grazing on these areas in the evenings. 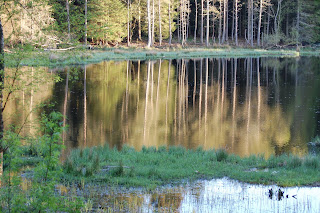 The last photograph was taken from the far side of the pond. In the foreground you can see some of the sedge raft that I have described with the channels of clear water on the shore side.
Posted by Paul Ramsay at 22:14