I strapped one of my trail cameras to a tree, overlooking this bit of shallow water where there are many bits of stripped wood. Unfortunately, I forgot to check the length of time that the video would run for. It defaulted to six seconds. But perhaps the beaver made off because it was disturbed by the pink glow of the infra-red as it was triggered by the animal? Any suggestions? 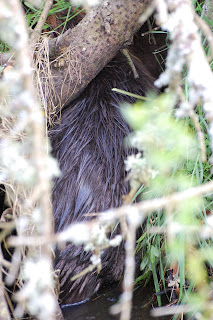 The photograph on the left shows the back of a beaver. She was very busy, digging a burrow in the bank of the ditch. I suspect that she is a female and is preparing a burrow in which to give birth to some kits. In the past I have been told variously that the female left the main lodge in order to give birth and that the female stayed in the main burrow and all the rest of the family left. I think that the first course of action is the more likely one - it tallies with my experience with sheep and cattle and I read somewhere long ago that women like to find a separate place in which to give birth. I wonder if anyone who reads this has an opinion to offer?
The downpours of rain of the last few days have raised the water level of the burn considerably and resulted in the development of new channels in the rebraiding of the burn, particularly as in these two photographs, below the middle dam. 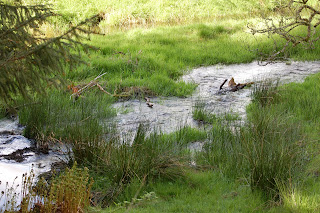 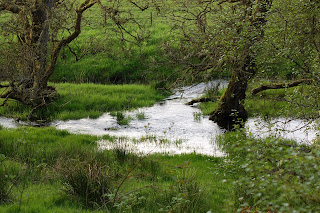