A Paddle down the Dean Water 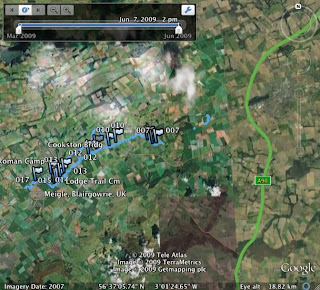 On returning from the Royal Scottish Forestry Society's Annual Excursion (which took place in Aberdeenshire this year and was very interesting) on the evening of Wednesday, 3rd June, I realised that it was time for another excursion of an entirely different kind. 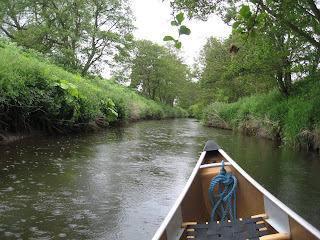 So, on the 5th June, I set off from just downstream of Glamis to paddle down the Dean Water to its confluence with the River Isla. The Google map above left of this shows the GPS waymarks that I made on this journey. The weather forecast was for occasional heavy showers of rain, so I took my waterproofs. The forecast was correct, so I kept dry and comfortable throughout the journey. Hail fell as well as the heavy showers of rain.
Signs of beavers were apparent all the way down, some probably at least two years old, perhaps more. There were not many fresh signs of activity near Glamis, but more further downstream. Herons flew up, warblers drilled at me, mallards rose into the air and a pair of mute swans swam ahead for much of my journey. House martins, sand martins, swallows and swifts flew about. Little trout jumped from time to time. Streamers of water crowfoot (Ranunculus fluitans) flowed in the current and I looked with delight at their delicate white flowers. It seems that water crowfoot is native to the south of Scotland, but has been spreading north. I saw plenty of it in a tributary of the River Don, when I visited Aberdeenshire last week.
Salmon fishers do not like this plant because they can get their line tangled up with it, so research is being undertaken to find a herbicide that will destroy the plant but not the fish.…
Time was getting on when, suddenly, my attention was caught by some apples that had been skewered on slender willow stems. Someone was baiting the place with a view to setting a trap for the beavers. There were more apples, as well as carrots, a few metres downstream.
I paddled on and caught up with the swans, who guided me over a weir. That is to say that I noticed which way they went and followed them. The same thing happened last year when I undertook the same journey. May 2008 was dry and the swans walked down the sloping downstream face of the weir. This year it was possible to shoot it. Unfortunately I lost sight of the swans as I concentrated on the weir and didn't notice how they had tackled the rest of the system. All went well, however, and I made it safely to Crathie Bridge. 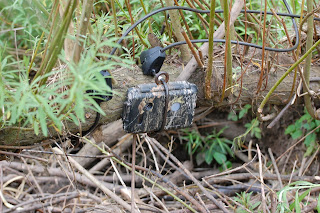 Today I returned to the banks of the Dean Water overland and found the baiting site and a lodge.
A trail camera had been set over the lodge. 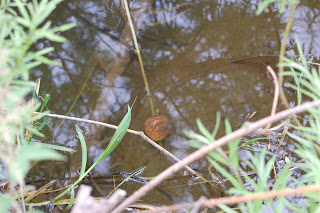 Here is an apple impaled on a willow wand. The apple has sunk, waterlogged, I suppose.
The history of the Dean Water is that Forfar Loch, which used to spread from the town of Forfar nearly as far as Glamis Castle, was very largely drained on the instructions of the Earl of Strathmore of the day during the eighteenth century. The Dean Water was canalised to carry the water away and was deepened to take away the water from inflowing ditches in the catchment. Much of the ground currently drained by the Dean would revert to wetland if maintenance of the ditches was abandoned.