The Alhambra Creek is the name of the river that runs through Martinez in California. Heidi Perryman's excellent web site is to be found at http://www.martinezbeavers.org/wordpress/.

Stanley Petrowski's article there is a must read because it describes so much of the background to the present socio-economic situation in Oregon and the rest of the Pacific North-West.

Not only is Stan's piece excellent, but Heidi has written a really good summary of the conference, which makes it unnecessary for me to say any more about the presentations.

I will, however, say something about my visit to Stanley Petrowski's ranch, Singing Falls, at Tiller.

Before I left Canyonville, I dropped in to the local general store where, a couple of days before, I had photographed the stuffed cougars, mounted high on the wall. 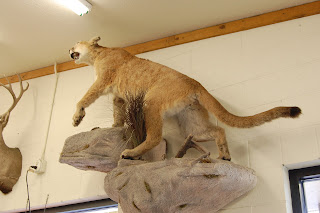 Here is one of the cougars 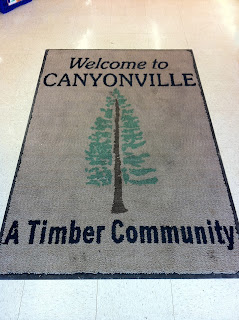 This mat lay at the entrance to the store. 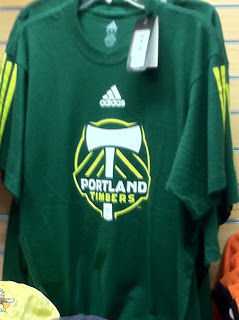 Later, I saw this T-shirt in the airport at Portland.
Twenty years ago timber was the main industry through much of the Pacific North-West: communities such as Canyonville were heavily dependent on it. Unfortunately, the lumber industry had no notion of the meaning of sustainability, limited understanding of the environmental value of old growth forest, and so the plundering of the forests sped on fed by the notion that the forests of the West were inexhaustible.
The timber industry is still very important in the area, as I noticed from the number of trucks driving loads of first class timber along Interstate 5 up to Portland.
Conservationists were disturbed by the destruction of the ancient forests and ornithologists noted that numbers of the Northern Spotted Owl, which had been declared an endangered species and which is dependent on old growth forests, were declining. There followed litigation, which went right up to the US Supreme Court. As a result the timber companies were forced to restrict the amount of timber they might cut.
Coinciding with the period of extreme cutting, and subsequently, the timber companies had been mechanising and automating their sawmills. The result was that the '90s saw a radical reduction in the number of people employed in the timber industry.
The unemployment that followed caused enormous bitterness, some of which was focussed against environmentalists. 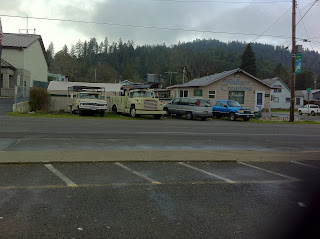 The clear cutting of the forests of the Pacific North-West, along with a variety of other causes (including runoff from roads, pesticide use) had a devastating effect on the salmon fisheries. Rivers and creeks that had run with salmon early in the 20th century had lost their abundance by the 1990s, even reaching the point of local extinction by 2000.

The recognition that communities must recover from the depression that resulted from the loss of employment in the timber business led to the formation of groups and associations of people who had come to recognise the links between community and land. The South Umpqua Rural Community Partnership is one of these.

The restoration of rivers is one of their main projects and the recognition of the part played by beavers in the management of healthy river systems came to them early.


Duncan Halley told me of the remarkable work of restoration that was being carried out along the Joe Hall Creek.


I had some warning of what to expect when Leonard Houston gave his talk on the last day of the conference. He showed a photograph of a Chinook helicopter that was used to lift timber up to the creek and lower it into a precise position. I took a photo of this photo: 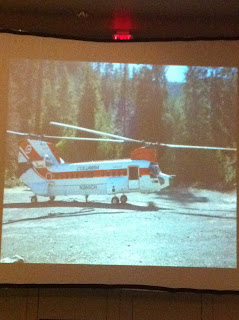 Here are some photos of the Large Woody debris that was placed in the course of this project. 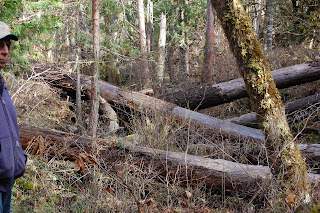 The recognition of the importance of Large Woody Debris and Coarse Woody Debris has come about relatively recently. Stan told us that it was as recently as twenty years ago that fishery managers were still keen to remove fallen trees, branches and other woody debris from water courses in the supposition that they would make obstacles for migrating fish. 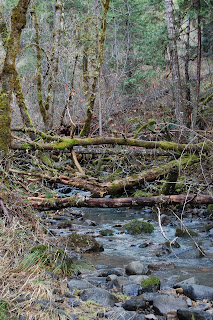 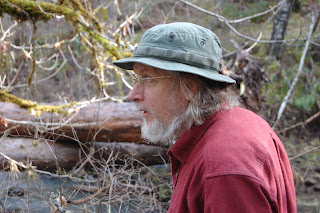 Much of the damage to the river system had been caused by the timber industry's practice of splash damming. This involved storing felled logs in a pool in the river that had been dammed and breaching the dam when enough timber had been gathered there, and in a time of high water. The timber would be washed downstream to some point where it could be gathered up and stored before being loaded onto ships and exported. The scouring caused by this method of transport eroded the river bed down to the bare rock in many places with the resulting loss of gravel beds where the salmon redds used to be. No redds = no salmon. 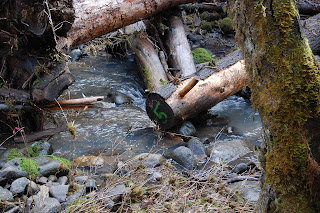 The figure 5 that you see in this picture refers to the weight of the log i.e. 5 tons. 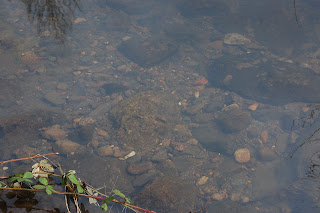 Stanley pointed out that, after only a couple of years since the placing of the Large Woody Debris, gravels and sands were settling out into the recreated bed of the creek.
The Joe Hall Creek is a tributary of the Elk Creek, itself a tributary of the South Umpqua River. Leonard Houston had described the return of beavers to Elk Creek in his talk about the restoration project for that river.
Where the scouring timber reduced the rivers it rushed through to simplicity, the return of the timber and the beavers is bringing back complexity. In the Pacific North-West before the advent of industrial forestry and other European forms of land use this provided the niches that enabled the six native species of salmon to evolve in their waters.