Three Killings and the Importance of Gravel

The news that three beavers have been killed somewhere upstream of roughly Meigle is upsetting, but not surprising, given Allan Bantick's advice to his audience in Forfar a year or two back that landowners might shoot what they saw as errant beavers. Ian Ivory was given similar advice by Scottish Natural Heritage, though I am told that he has not followed that advice so far. For which, Ian, grateful thanks, should you read this blog.

It is sad that the Scottish Wildlife Trust, through Chairman Bantick, and SNH should behave in this way. Can it be that they are jealous of the success of the accidental return of the beavers to Tayside? They seem to think that the free beavers of the Tay are a threat to the success of their project.

So far as local tourism is concerned our beavers at Bamff have been a draw for the Cateran Trail and those that live along the Isla are bringing interested walkers to visit the banks of that river. 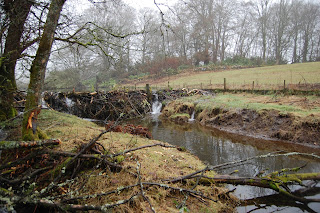 Here is the dam that Ronald Campbell of the Tweed Foundation claimed would be impassable to salmon, but which John Thorpe stated would be passable. I asked another fish scientist if the name of Professor Thorpe, uttered in the presence of Ronald Campbell, would be enough to cause him to vanish in a puff of smoke. This person assured me that it would.
Anyhow, here is that dam again: it would be a very weak salmon that could not make it up to the pool above.
My recent visit to Oregon and the Joe Hall Creek reminded me of the importance of gravel for salmon redds. As I look at the fast flowing waters below the dams here I see signs of development of the kind shown me by Stan Petrowski. 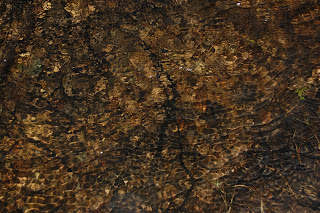 These two photographs might have been better if I had thought of taking a polaroid lens with me.
I like the effect, even if you cannot make out the gravels very well. 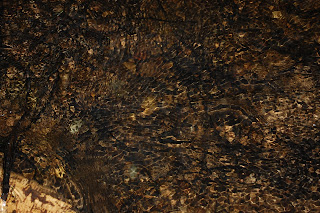 A point that Louise makes from time to time in the discussion of whether the Burnieshed Burn is a suitable place for salmon to breed in is that this was an agricultural ditch until 2007 when the beavers built the Ronald Campbell High Dam and the two other big dams downstream. The ditch is undergoing a process of rewilding with all that means for the return of complexity and enriched biodiversity. 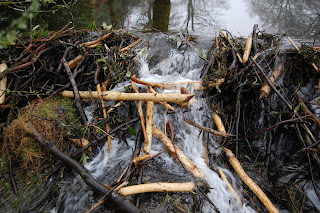 Water tumbling through a spill way in one of the dams. 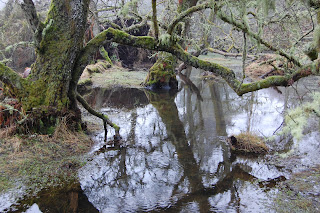 A real beaver swamp
Posted by Paul Ramsay at 18:35