Louise and I drove out of Blairgowrie and parked by the road end to the farm of Millhorn, whose tenant in the 1540s was required by his landlords, the Abbey of Coupar Angus, to provide them with cranes, herons and other wildfowl, including dotterel for the table. The photograph below shows the River Ericht in the middle ground with the hills above Alyth in the background. The path at that point is approaching Kitty Swanson's bridge. The lady, after whom the bridge was named, was the boat woman who rowed people who wished to cross the Ericht between Rattray and Blairgowrie, or so I have always thought. 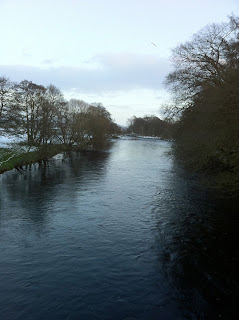 This photograph shows the river, looking downstream from Kitty Swanson's bridge. The trees on the river's edge are mostly alder and the banks of the river are grassy, showing a history of grazing: not great habitat for beavers, but I did see a freshly barked stick that had probably been washed down from further upstream. 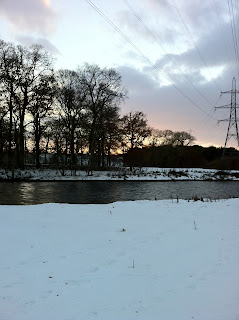 We walked upstream from Kitty Swanson's Bridge for a little. The fishermen of the Blairgowrie and Rattray Fishing Association had been very active in cutting back the bankside vegetation. 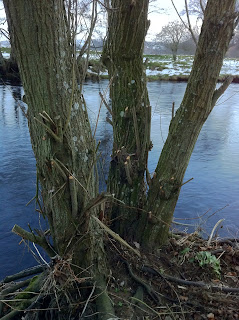