To the confluence of the Ericht and the River Isla

The Blairgowrie sewage works are on the south bank of the Ericht, a little way out of the town, off the Welton Road. The habitat for beavers looks pretty good with plenty of willows along the banks and mixed broad leaved woodland on the slopes immediately above the riparian zone.
The river is fished by the members of the Blairgowrie and Rattray and District Anglers Association, who are fairly assiduous in cutting back bankside vegetation. What they do is improvement of the facilities, but where the beavers carry out similar work it is described as damage (http://www.brdaa.co.uk/photo1.html. However, it would be worth speaking to those who run the BRDAA because I detect a sense of excitement in the exclamation mark that punctuates the announcement in their web site of the presence of beavers in the rivers they fish.. 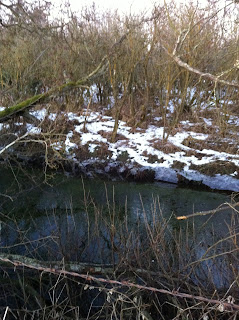 We walked some way beyond the sewage works, but decided to move on to see the confluence of the Ericht with the Isla. 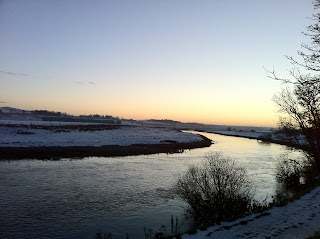 Here is the Isla, not far downstream of the confluence. Coupar Angus is in the distance on the slope to the left of the middle ground of the picture. The absence of riparian woodland shows that stretch to be of little interest to beavers. 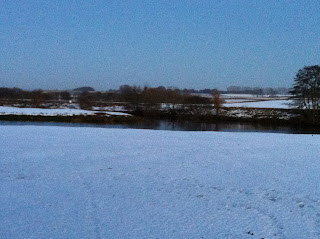 Dusk was settling when we reached this point: the confluence of the Ericht and the Isla.
There are some backwaters and bits of old oxbow in the Ericht just before the confluence, but the main features in the landscape are the extensive flood protection banks.
A flock of goldeneye lifted off from the river and I watched them fly into the darkness.
There were no signs of beaver along the bits of river that we looked at, but the negative helps define the places where we should pay attention next.
Posted by Paul Ramsay at 18:59