The Wet Wood - Changes and the Canal 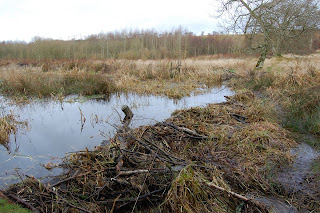 Some visitors came from Aigas yesterday (Wednesday, 25th November). The rain rained and the wind blew. We walked along the Burnieshed Path (aka Cateran Trail) and looked at the dams and pools.
After lunch we went over to the Wet Wood. I had not been there for about a fortnight and was very much impressed with some of the changes.
This photograph shows the greatly worked on dam, whose tiny beginning you see in the next picture but one. The leaning fence straining post just to the left of the dam can be seen in the next two photographs. 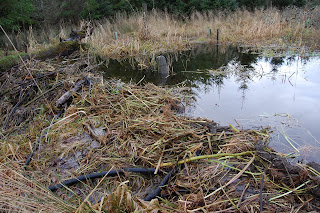 The straining post of an old fence can be made out about the middle of this photograph. To the left of the dam you can see a fallen ash tree (pre-beaver) on which an otter had left many spraints earlier in the year. You can see this tree trunk in the next photo.
The dam has been greatly built up with the stems of Sweet Reed Grass (Glyceria maxima).
The combination of the heavy rains and the building up of the dams has raised the water level of this pond and the low ground near it a great deal, as the later photographs show. 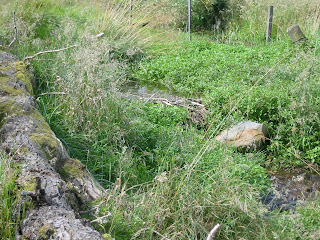 This photograph, taken in the early summer of 2003 shows the dam, illustrated above, earlier in its history. The fallen tree trunk is on the left of the picture.
The straining post is in the top right of the picture and is surrounded by vegetation. It is covered by water up to the same level as the vegetation. 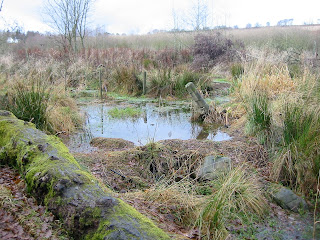 I think this photo was taken sometime in April 2004. The dam is bigger. You can see the tree trunk (it looks more like an oak than an ash) and, middle right that fence straining post, unsurrounded by the luxuriant growth of water cress (Rorippa nasturtium-aquaticum). 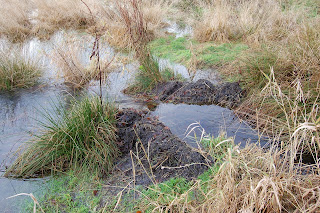 We walked along behind the dam and then along the side of the ditch that runs north, until it was time to cross. I chose to cross here, where the beavers have built a curious pool with a spout at the downstream end. The structure is like a funnel. There has never been any question of this being a dam. 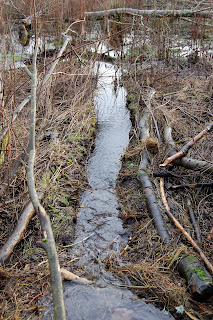 We walked on into the groves of willow. The canal has now been extended right through one of these and meets the overflow from the little pond to the westish (West-North-West) of the larger one. The canal is quite deeply dug lower downstream and there is a small dam, as shown here. 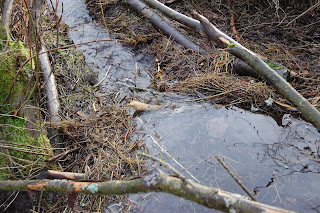 I nearly forgot to say that I took the photographs this morning.
Posted by Paul Ramsay at 14:10