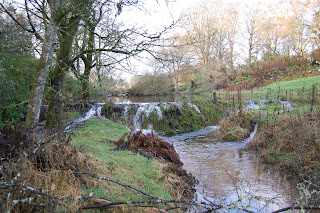 I took these photographs on Friday morning after the heavy rainfall of Thursday night that had caused so much flooding down in Cumbria.
We had a couple of inches (50-75mm) that night and the same again fell in the last 24hours until this morning (10:00hrs.), November 22nd.
The dams are holding up well so far.
The water is pouring over the tops and along the overflow passages. Some is coming through the dams as well, though not a lot. 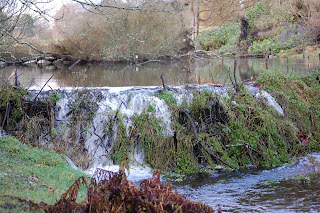 This shot, taken rather closer to the top dam below the drive, shows you what I mean. 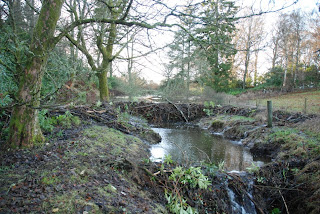 This and the next photograph were taken by Derek Todd, who is the webmaster of the 'Alyth Voice' and a colleague on the newsletter's editorial committee.
Derek took these photographs of the predecessor to the top dam downstream of the drive just a few days (late November 2007) before it was breached during a weekend of heavy rain.
This dam and the smaller one below were built during the summer of 2007.
As you see, the main dam crossed the burn and then had a couple of extensions that ran at an angle downstream from it. You see this very clearly in the next photo. 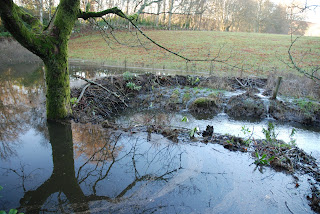 Here you see the dam from the path that runs parallel with the ditch.
A sycamore tree provides a pillar from which the southern arm of the dam pivots.
Downstream of the big dam there was a smaller dam. 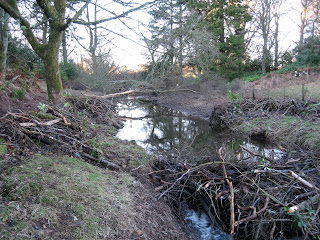 On the night of the 30th November 2007 a flood that resulted from heavy rainfall burst the dam and the central section was washed away entirely, as was the small dam lower downstream.
By the 3rd December 2007, when I took this and the next photographs, however, the beavers had already begun to rebuild a dam a little downstream from their earlier construction. 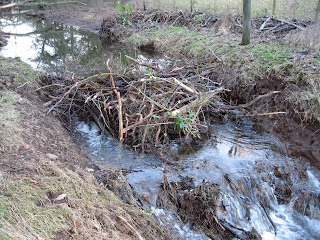 The beavers built this new dam in line with the straining post of the fence that had bordered the ditch - you may have noticed it in photographs of the dam as it is now. The whole structure is a couple of metres east of the big sycamore that served as a turning post for the earlier dam. It has been ringed by the beavers since and has become Coarse Woody Standing Timber. 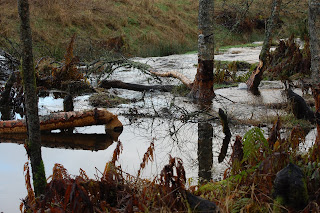 This photo is taken from the south bank of the third dam downstream from the top one.
The water is flowing straight past the dam, enhancing the new braided pattern that the stream is developing. 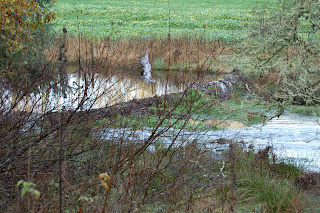 Back up stream - this is the middle dam - an elegant, slender structure. The overflow is at the southern end and you can see the water flowing from the left to the right of the picture. 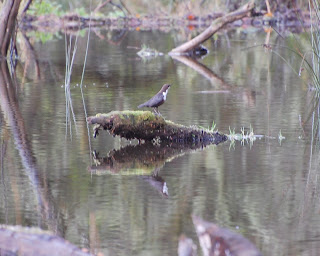 My great delight on Friday morning was to see three dippers (Cinclus cinclus) flying about the burn and ponds.
I had not seen dippers here for a long time, perhaps years, so the return of these attractive birds is very exciting.
Dippers are characteristic of fast flowing rivers and I nearly always see them when I am canoeing along the Tay. It will be fascinating to see if the beaver changed stream will prove attractive enough for them to want to breed here, or if they will just be visitors for the winter.
Posted by Paul Ramsay at 17:18