The members of the International Beaver Symposium's Organising Committee were Alius Ulevicius of Vilnius University, Lithuania (whose photograph you see on the left), Algimantas Paulauskas of Vytautas Magnus University at Kaunas, Lithuania, Karl-Andreas Nitsche of the Castor Research Society, Dessau, Germany and Peter Busher from Boston University, Boston, USA.
As I said in my last post they made a splendid job of organising the symposium in a beautiful place with the added advantage of wonderful weather. 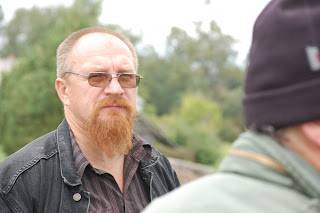 This shot is of Algimantas Paulauskas, who very kindly drove Louise and me to an ATM in order to extract some cash with which to pay for our contribution to the symposium. I thought the ATM would be just round the corner, as it were, in the village of Dubingiai, but he drove for about fifteen kilometres to a town with a supermarket that had an ATM.
Vytautas Magnus University is named after a Grand Duke of Lithuania of the fifteenth century. 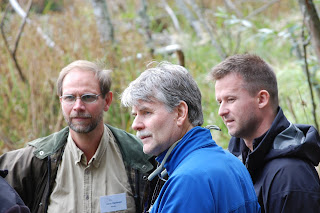 I mentioned Karl-Andreas Nitsche in my last post, so there is no picture of him this time, but there is a photo of Peter Busher. He is the person in the middle of the group of three on the left. To the left, as we look at the photograph, is Göran Hartman from Sweden and to the right is Frank Rosell from Norway. Both Göran and Frank have been great supporters to those of us who are involved in the campaign to return the Eurasian beaver to Scotland. 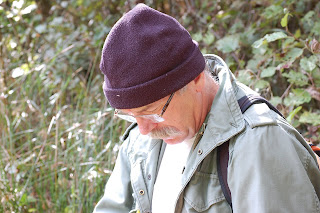 My next photograph is of Zygmunt Gizejewski from Poland. It turned out that he had supplied Derek Gow with the black pair of beavers that later came to Perthshire and were the parents of the two sisters that arrived here at Bamff on the 1st July 2002. Zygmunt was delighted to learn that I still see black beavers in the area of the Big Ponds here and that there are dark kits.
It also turned out that Zygmunt was the supervisor of Joanna Bierla, who gave a brilliant presentation about beaver sperm at Freising in 2006. Unfortunately Joanna could not come to Dubingiai, so Zygmunt gave her presentation, an update of her earlier work. 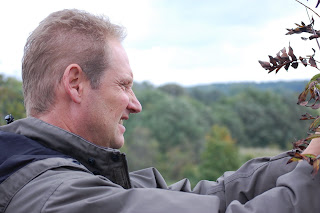 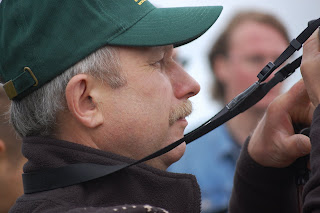 The Russians, Belorussians and Ukrainians were present in some strength as you might expect. This photo shows Alexander Saveljev. 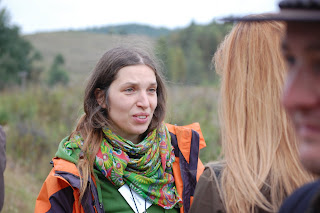 A striking young woman in flowing green clothes turned out to be from Serbia. 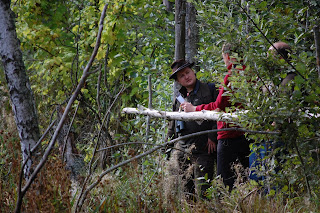 Jorn Van den Bogaert from Flanders is the man in the hat talking, I think, to Duncan Halley (once a Scot, now a Norwegian). Duncan is one of the many who have been extremely helpful in our efforts to return the beaver to Scotland.
As I mentioned earlier, the Russians were probably the biggest group present and there were Belorussians as well. Vadim Sidorovich was one of these. Lying out for sale was a book by him about the trails and signs of animals in Belorussia - a wonderful book full of very interesting and highly informative text and photographs of the fauna of his country (bears, wolves, lynx and a great deal else). The photographs of the Belorussian landscape were heavy with atmosphere.
Vadim Sidorovich's email address is: vadim.sidorovich@gmail.com.
And what about the Brits? There was a group from the Scottish Wildlife Trust, led by Allan Bantick, their president, with a couple of people from the Forestry Commission Scotland and one member from the Royal Zoological Society of Scotland. They came with a pair of minders from Scottish Natural Heritage.
Martin Gaywood from SNH (the chief minder) gave a plenary lecture. The high point of the talk came when he told us that the Scottish Beaver Trial was going to cost £1.8 million. There was a gasp of astonishment from the audience. The low points came when he told us that the Scots were a very cautious people - was he, an Englishman, speaking for the country of Wallace and Bruce? What would Admiral Duncan have made of this description when he took on the Dutch fleet at Camperdown? And so forth. It was somewhat embarrassing, I thought, for the official trial, but there you go: at least it has lifted off at last. 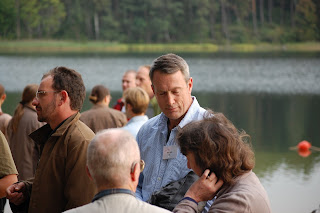 It was particularly good to meet Skip Lyle from the USA again. That's him - the big man in the middle of the photograph. To his right in profile is Andrzej Czech from Poland. Skip is now in business as a designer and maker of beaver deceivers, a non-lethal way of keeping open road culverts and other things that beavers like to block on occasion. Andrzej is Skip's business partner in Poland. Allan Bantick has his back to the camera and Louise is speaking to Skip.
I think that is enough for now. Perhaps there will be more about Lithuania? There was a wonderful feast and a very interesting excursion, some photographs of which are already on my blog and in this post.
Posted by Paul Ramsay at 13:57