The present spell of dry weather is a godsend to the arable farmers around here (and to stock farmers keen to see the sun on their animals' backs as well). After the wet summer many must have been gnawing their finger nails with frustration. Now, at last, the spring barley and wheat can be cut. Then it will be time for potatoes to be lifted. I noticed some fields of potatoes, whose shaws (the vegetative bits above ground) had been burned off a week or two ago to be ready for lifting.
In the meantime the water level in the main burn here has dropped enough for the overflow of this dam, the first one downstream from the drive, to cease running for the moment, though water continues to gush abundantly lower down through the dam . 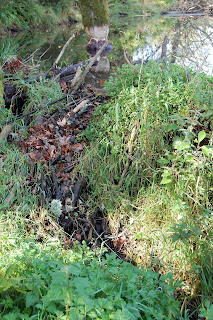 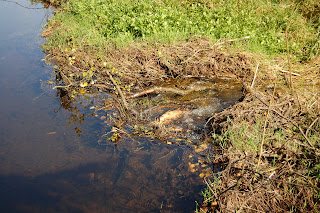 At the middle dam the beavers have blocked their sluice to maintain the water level. 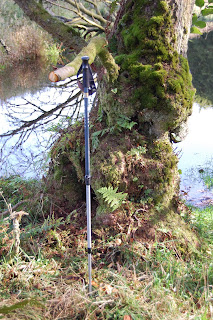 I walked on downstream this morning and was amazed to see the height at which a beaver had cut a small branch. 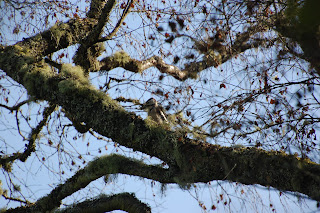 While I was photographing the cut branch I became aware of a gnawing sound. After a while I placed it up above somewhere in a tree. Was it a squirrel? I couldn't make out anything .
After searching through my binoculars for a minute or two I found the beast. It was a Greater Spotted Woodpecker (Dendrocopos major). The sound that I had taken for gnawing turned out to be the knocking of the bird against the branch of the tree in its search for insects and seeds to eat. Perhaps it was a juvenile? In due course it moved round the branch to a point where I could see it better. The black and white plumage made it hard to make out among the shadows and patches of light; even the red on its head and under the tail blended with the turning leaves. I watched it poking around for insects among the lichen and bark of the birch tree, one of those that the beavers have gnawed at but left standing for the moment.
Woodpeckers are among the birds that benefit greatly from the presence of beavers, thanks to their provision of plenty of dead wood into which invertebrates of many species may burrow.
The kindly bird allowed me time to change my lens, so I was able to take the next photograph, a cropped version of which you see here. 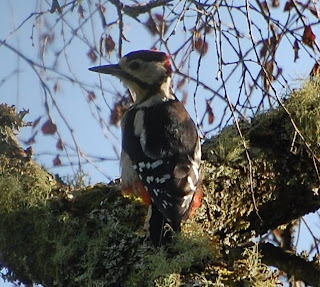