We returned home from the 5th International Beaver Symposium in Dubingiai, Lithuania on the 25th September.
Louise and I have attended the last four of these Symposia and the effect is a curious one. Somehow the years that intervene between one meeting and the next seem not to have existed and it is as though the earlier meetings had all been part of a single sequence.
We found various friends there and enjoyed many conversations with them and others, new friends who we shall meet in the future.
I seem to be spending a long time in getting back on line and so I must send this post now. 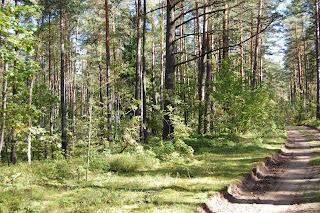 Woodland near the conference centre at Dubingiai. 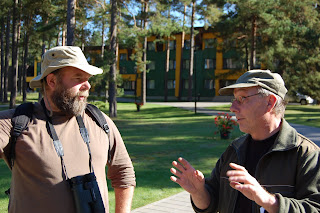 Here are Derek Gow, a Scotsman who lives in Devon, England, and Karl-Andreas Nitsche from Germany.
Derek has been involved in beaver matters since 1994 and quarantined the beavers that were brought in to the United Kingdom for the recent beaver trial in Scotland.
Karl-Andreas is well-known for his work on the beavers of the River Elbe, one of the places where a small population of the species survived in western Europe. 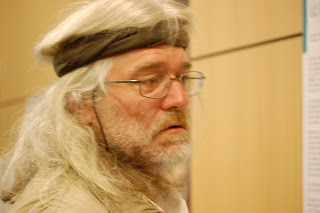 Gerhard Schwab from Bavaria is a grand old man of the beaver world. We were sorry to miss Regina, his partner, who was unwell. 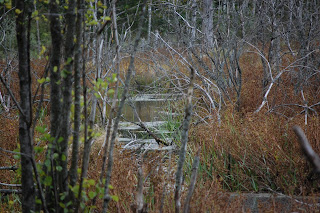 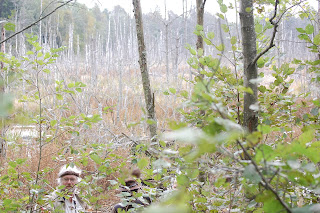 A birch wood flooded as a result of activity by beavers. Many of the dead stems have become the burrows of different species of woodpecker and owls.
Vadim Sidorovich from Belorussia has a couple of splendid pictures in his fine book on animal tracks and signs in Belorussia that show the holes made by black woodpeckers. It seems that pine martens and a variety of other animals make homes in these holes as well as their makers.
Gerhard Schwab is the figure in the bottom left of the photograph. 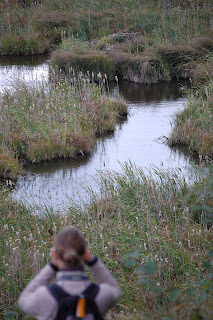 A beaver pond in open ground. The beavers keep the pond open and it has become a haunt for wildfowl.

The figure in the fore-ground is Marie-Laure from the Office National pour la Chasse in France.

I intend to put up another post, describing more of the symposium, but I must not let the moment pass without thanking Alius Ulevicius and his organising committee for all the work they did to make this a tremendous success.