The recent rains have raised the water levels of the ponds here and the rivers around here are mostly in flood. 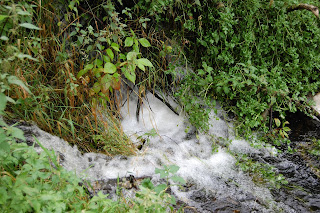 Here is water, foaming through the biggest of the dams. The stream of water coming in from the left of the picture is the bottom end of the right hand side of the overflow stream that you see in the next photo. 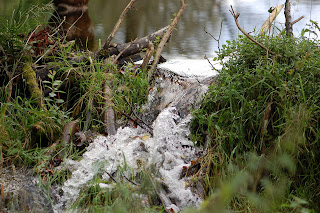 The left fork of this overflow rushes on down. A few metres downstream of this shot there is a path that enables beavers to walk up to the pond upstream of the dam, or to walk down from the pond (as the case may be). 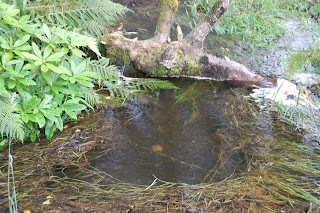 Here it is a few metres downstream of the last photograph: but an interesting thing has happened. The sward of grass that underlay the new stream has been scooped up, whether by the force of the current, or by beavers, I don't know. Whatever the agency, however, the removal of the grass has exposed the floor of the stream, and has resulted in the washing away of the lighter fractions of the soil, which is now more gravelly and pebbly. You can make out one of the larger pebbles in the photograph. Are we witnessing the re-creation of a trout stream? 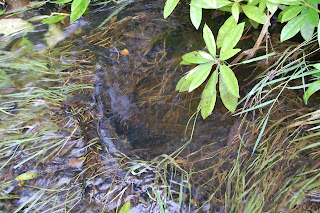 In this photograph, a little further downstream from the last shot, it looks as though a beaver has dug beneath the sward and pushed a tunnel through to the next open stretch before this channel flows into the pond that is contained by the next dam. 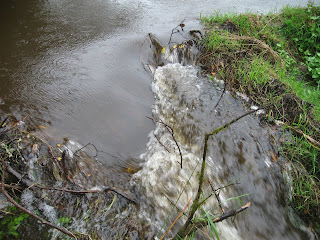 Here is the next dam, breached in the middle, and with a fine overflow channel. Is that a standing wave I see? 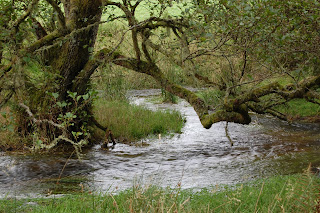 A few metres on: some of the water flows into the old ditch and the rest heads on through a new channel into the third pool. 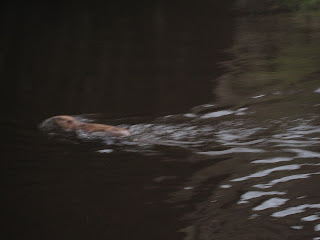 Not a very good photograph, but one that I had the good luck to take of a young beaver, probably a yearling.
Posted by Paul Ramsay at 17:00