Dams, Salmon and the Tweed Foundation 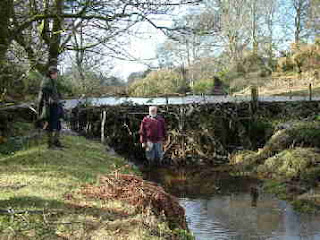 This is a photograph of one of the dams here at Bamff, taken on the 12th of March this year by Bob Laughton, biologist of the Spey Fisheries' Board. The person standing in the water below the dam is Ronald Campbell of the Tweed Foundation. I am the figure standing on the bank. I copied this photo from the website of the Tweed Foundation
(www.tweedfoundation.org.uk
The Tweed Foundation's web site is well worth a visit, not least the section entitled 'Fish & Beaver - The Facts'. It should be borne in mind that when the Tweed Foundation mention the word 'fish' that means salmon primarily. Trout may be included and they have extended their interest in fish to include grayling, but other species of fish are tolerated at best, or like anything else in the biota that may 'interact' with salmonids, be subject to persecution. As to the proud boast that you will get a definitive statement as to the 'facts' of the interactions between salmon and beaver, I fear that the impartial reader will be intrigued but disappointed.)
Dr. Campbell has been using this photograph as an illustration to support his case that salmon will not be able to pass such dams and that this will be catastrophic for the fishing of salmon in rivers like the Tweed and its tributaries.
This is an odd assertion because the Tweed and its larger tributaries are unlikely subjects for blocking by beavers, being wide and fast flowing. Eventually a recolonisation of the Tweed by beavers would reach the smaller tributaries, but would they want to be there, considering the dearth of riparian woodland? Probably not. 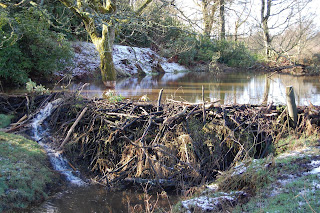 The next photograph, taken on the 4th of March when the water level was much the same as it was on the day of Ronald Campbell's visit, shows the overflow that the beavers left as a chute. When John Thorpe, the distinguished president of the Fisheries' Society of the British Isles, came to visit Bamff on the 5th April, when the water level was once again much the same as it had been at the time of Ronald's visit, he thought that salmon would be able to pass up the overflow and into the pond beyond. 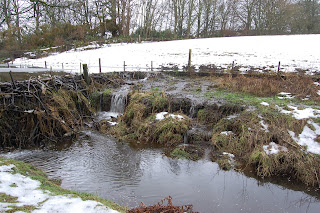 On the other side of the dam is another overflow with a small waterfall and thus the potential to become a passage for fish. This photograph was taken on 16th February this year.
Professor Thorpe also took a radically different view of the interactions of beaver with salmon from that of the Tweed Foundation. Essentially, if I have remembered him rightly, he thought that the enormously enhanced productivity that the activities of beavers conferred on a river system could only improve the prospects for salmon.
The work of Sigourney et al. is a contribution to this point of view (see 'Transactions of the American Fisheries Society' 135:1068–1075, 2006). 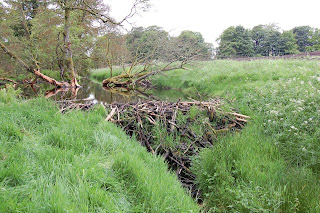 I should say that Professor Thorpe and Dr. Campbell were in agreement that the lowest dam of the flight of three would be impassable to migratory salmon in its current state. It will be interesting to see how this dam evolves and changes because if one thing is certain about beavers and their activities it is that they are highly dynamic.
Essentially the Tweed Foundation is about maximising production of salmon, whereas the ecological approach to rivers, of which Professors John Thorpe and Robert Naiman are proponents, is about the whole riparian ecotone. The Tweed Foundation are condemned by their charter (or whatever document describes their purpose) to a narrow view of the freshwater world. Like the forester who cannot see the wood for the timber in the trees, the salmon managers in this instance are unable to see the river for the fish. (Though I should say that Ronald Campbell and his team have done excellent work in the Tweed and its tributaries over the years in removing manmade obstructions and in carrying out important work in the restoration of riparian woodland).
When thinking about beavers, their dams and the landscape, it is important to remember that the topography determines how the dam will be built. At Bamff the dams I have photographed for this blog are built across an agricultural drainage ditch. This ditch was first dug probably in the late eighteenth century. Since then it has been 'cleaned' out periodically and the profile of the ditch has become deeper and more wedge shaped through time. 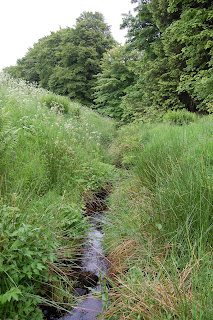 Before the arrival of the beavers the ditch was about thirty centimetres wide. This photograph looks east from the place where the previous one was taken. 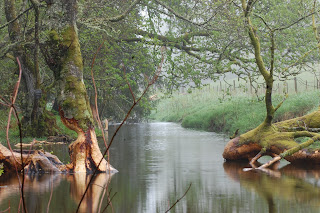 Since the beavers created their ponds these have become alive with trout. This is the pond upstream of the dam that would be uncrossable at present.
Therefore the beavers, in wishing to block the ditch, started by damming the wedge. This, eventually, is what salmon would have difficulty in jumping if such a dam were in a salmon river. Although salmon can leap up to about two metres in height, they need a deep enough plunge pool below the dam, and a nice standing wave there from the water coming over the top of the dam, to carry out their leap successfully.
Having built the wedge and blocked the water course (in fact, the dam is really a filter and not a complete blocker of the water that lies upstream), the beavers' next step was to extend its length in order to capture, or direct, the water that flowed round the dam as the level of the water upstream was raised. Thus beavers began to restore a braided character to what at Bamff, for example, has been a simplified drainage system.
To be fair to Ronald Campbell and the Tweed Foundation, they are worried about the capacity of salmon to pass beaver dams in a small tributary in a dry autumn. Given such a problem I don't see why they shouldn't be allowed to cut notches in dams to allow salmon through, as is done in the Miramichi River in New Brunswick, Canada. Although it may be worth pointing out that if the drought is so great, the pools created by the beavers' dams may well be preserving such young fish as are living in that part of the river system.
The photograph below was taken by Duncan Halley on the 5th May 2008. It shows a dam on the Leirbekken in Norway. The dam itself is submerged by the flood waters and the force of the water flowing over the dam has produced a fine standing wave to propel any migrating salmon over it. 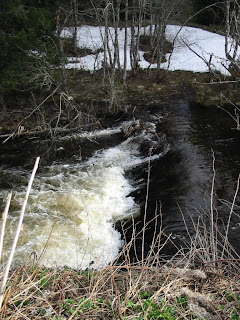