Some Thoughts on that Paddle down the Dean

The pungent fragrance of liquorice greeted my nostrils as we carried my canoe and equipment down to the banks of the Dean last Friday.
I set off as I described in a recent post and contemplated the sides of the stream. In many places, especially on bends, riparian owners have dumped loads of rock into the river in order to limit erosion, especially in time of flood. This creates an unpleasant hazard for canoeists in that these boulders are sharp and some of them roll into the middle of the stream, where they lie in wait. 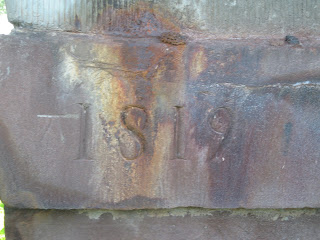 When I bought my kevlar canoe a friend told me that I would cry the first time it was scratched, but that thereafter I would become inured. So far my worst accidents have been an unwise attempt to paddle over the weir at Ruthven in low water and striking an iron bar when coming into Bridge of Crathies, near Meigle. Both accidents required repairs, using patches of kevlar, bought at Brookside Canoes' store at Inveralmond in Perth.
Many of the place names in Strathmore ( Great Valley) refer to the former wetness of the landscape. Meigle comes from an old British/Pictish word for 'bogginess' and you canoe through the surviving bit of that bog as you head down the last stretch of the Dean from Cardean to Bridge of Crathies. The date in the photograph is carved into the east side of the bridge.
The surrounding landscape is one of intense agriculture. The big farms with their modern sheds and equipment mostly have great stacks of potato boxes, built high. Huge polytunnels cover large areas of the country to the extent that some wags refer to Strathmore as Strathplastic. 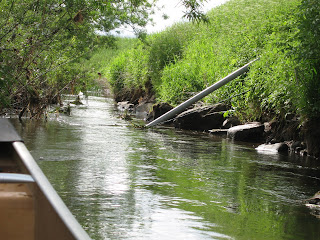 Some crops need to be irrigated, so from time to time the canoeist sees pipes emerging from the water to disappear up and over the high bank. The drumming of pumps can be heard, showering water onto the thirsty crops.
What were the apples doing then, impaled on their willow wands? It seems that the Royal Zoological Society of Scotland have been asked by the Scottish Agricultural Science Agency (SASA) to trap beavers in the Dean Water and perhaps elsewhere in the catchment of the Tay, from where there have been reports of the presence of the animals.
The beaver that made landfall in the Tentsmuir Forest in Fife has now been caught. I think that it must have been washed out by the tide and managed to swim ashore. Where is that poor beaver now? Perhaps it is on its way to England, where there are moves to bring back the beaver?
The beavers concerned must all be escapes from places where they have been enclosed, which means that they are all Eurasian beavers. Such was the case with the beaver that was captured at the Sandyknowes Fishery near Bridge of Earn in 2007. It seems, however, that some 'authorities' think that a gang is releasing beavers into the wild and that these beavers may be North American and thus exotics, which must be caught. This seems to me very unlikely.
Who was it who thought that with the decline of terrorism à la mode de George W Bush eco-activists would become a subject for the attention of the security services? Runways, coal fired power stations, beavers? Aaaaargh! 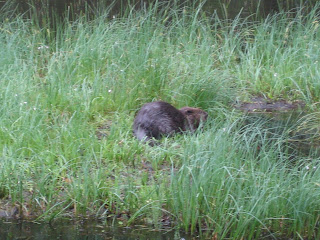 A beaver in the Big Pond at Bamff eats some sedge on a rainy evening in June, unaware of the wickedness in the world around.
Posted by Paul Ramsay at 12:21