Return to the Wet Wood 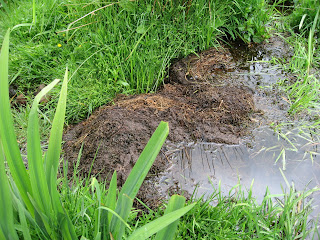 Tony Morgan told me about ten days ago that he thought he had seen signs of renewed activity in the beavers' original enclosure. So, this afternoon, having forgotten what the various things that I had meant to do in my office were, I put on my waterproofs and set forth. The first evidence for a renewal of activity was the repaired parapet to the man-made dam that the Scottish Government's agricultural department's (now SGRIPD) inspector had asked me to instal back in 2002. Clearly a beaver had carried out this work and the water behind the dam had been raised to its former level. 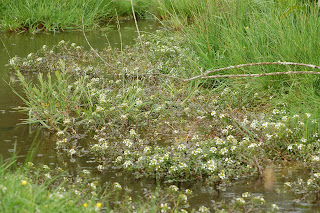 I walked on. The beds of water cress are splendidly abundant: I found a place where a beaver had been consuming some of the plants. 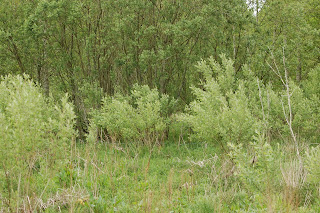 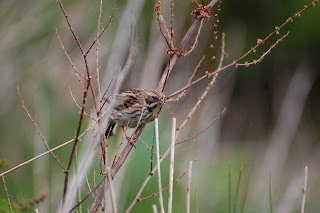 While I was standing near the old artificial lodge that Roy Dennis and the Banticks built back in December 2001, I noticed a small brown bird, flitting about. It turned out to be a female reed bunting (Emberiza schoeniclus), a supposition that was confirmed when her mate appeared. 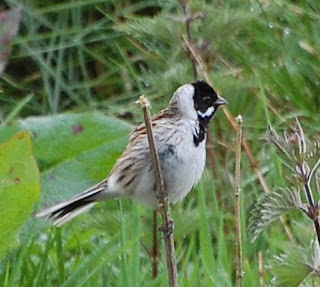 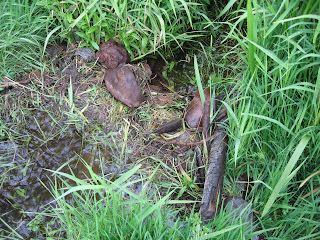 On my way out of what I have come to call the Wet Wood I crossed this small canal that the beavers dug some years ago. As you can see, they have built a dam using stones mostly.
I was pleased to see that the beavers have resumed operations in their original enclosure because I have always wondered why they should have moved downstream, given the apparently greater abundance of food plants, including willow in the Wet Wood.
I had meant to write something more in the way of 'Reflections on my paddle down the Dean Water', but that will have to wait for another post.
Posted by Paul Ramsay at 21:19