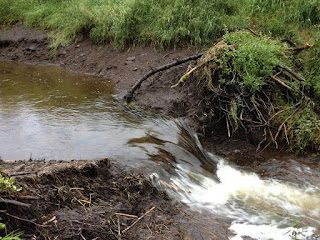 Yesterday morning the dam I call the Third Dam was still there, but by the evening it had been breached. The thunder storms of the afternoon with their heavy rain were too much for it after all the rain of the past days, and once again powerful forces took it away. This is the dam that caved in to the rains in July 2011. This time it took with it at least two other smaller dams downstream.

Dynamism is the watchword when dealing with beavers and their work in the landscape, but false pride always insists that 'my' beavers' dams are permanent. Here are the photographs that give this idea of permanence the lie: and just in time for any migratory fish you may think. Just so! 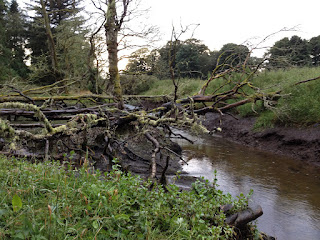 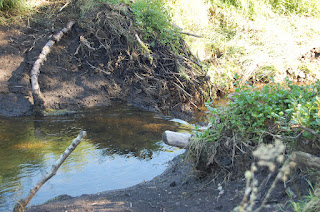 Once again it was just the wedge of the dam that blocked the line of the old ditch that gave way: the rest has survived. 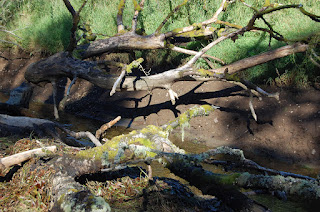 The drop in the water level revealed a good deal of the coarse woody debris that has been accumulating in the pool.

Some of the fish will have been washed downstream and may have been held in the pool, where the dam survived, some two or three hundred metres downstream. This dam lies in a stretch of the burn where it is becoming more natural (i.e. less straight).

I thought I should go and find my trail camera, opposite a lodge beside the Big Ponds, but when I reached the place I left it, it had gone: stolen, I think. Nearby was a plastic shopping bag, full of empty beer cans and knotted to keep them in - a thoughtful gesture, if it was left by the same people who had taken the camera with its Joby Gorillapod. I have now had three trail cameras stolen. Each time I buy another I think I will put it somewhere safe out of the way of raiders but inevitably, it seems, they fall prey to sticky fingers. I shall have to buy an armoured container and heavy chain to secure my next trail camera.