The other day Tina Ng-A-Man told me that I had not explained why it was necessary to instal a pond leveller, or similar installation in a body of water. When I looked back at the post I saw that she was right. The purpose of a leveller, or flow device (call it what you will) is to prevent beavers from raising the water level unacceptably (for humans).

As this query coincided with closeness to the deadline for my contribution to the September number of 'The Alyth Voice', I thought I should write a piece that dealt a little bit with flow devices, levellers or whatever you care to call them.


The swifts have flown, an early sign of the shifting of the seasons. I realised they had left Bamff one morning recently. I was taking a short cut across some fields to look at the flow device, which we have had installed to lower the water level in a stretch of ditch, when the thought came to me that the swifts must be on their way. There were no swifts around: they had flown.

The beavers first built a dam to raise the level of the ditch upstream of a bridge some years ago. From time to time it would be dismantled, but the beavers would rebuild the dam. The raised water level that resulted from this damming has caused some minor flooding in the neighbouring fields, particularly at the gateways. This brings a problem in that cattle and sheep poach the grass there and turn the ground to a sea of mud in a wet season (and which season has not been wet for the last how many years?). The mud and dung can lead to polluted runoff into ditches and burns, so it is important to reduce these concentrations of dirty ground. A recent visitor from the English Environment Agency pointed this out to us as Louise and I took him for a walk to see round our Beaver World. 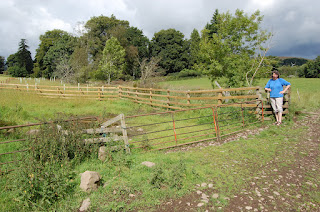 The wet patch in question is just beyond the makeshift gate.

Rather than dismantle a dam and have it rebuilt by the beavers it is better to deceive the beavers. Various devices have been developed to do this. The installation we took our visitor to see consisted of a 20 foot (6.096m) length of polyethylene drainage pipe of 200 mm (8 inches) diameter, a round cage made of concrete reinforcing mesh, some old iron fence posts to hold the pipe in place and wires to tie the pipe to these old iron fence posts. Steel rebars are the usual thing, but anything similar will do. First, a notch is cut in the dam to take the pipe. The water gushes through and the level drops. The greater part of the pipe is laid upstream and pinned down (but kept clear of the bottom of the ditch by some 6 to 8 inches (150-200 mm). The cage of steel mesh is installed. The diameter has to be big enough to keep beavers far enough away from the inlet of the pipe inside the cage for them not to notice the flow of water into it. The distance upstream of the dam where the upstream end of the pipe is placed is important because beavers react to the sound of running water near their dams. If a pipe can be laid far enough upstream of the dam for the beavers not to want to go and look there, and silent so as not to attract their attention, the water level can be regulated to fit in with human wishes rather than those of the beavers. Thus the installed pipe will carry away water that humans judge to be surplus and a conflict of interest between beavers and humans will be avoided. The Martinez Beavers web site has some excellent links.(www.martinezbeavers.org)

I drove on after looking at the levelling device. At the road end I found Danielle Muir, the P&K Council countryside ranger. She was cleaning a sign for the Cateran Trail. Danielle told me that she has to check the rain water gulleys at the Steffort Corner on the Alyth Road from time to time to release the toads, frogs and newts that fall into them. The problem is caused by the kerb stones that have been installed there. The amphibians walk along the line of the kerbstones and fall into the drain and eventually die unless they are rescued. I understand that Perth and Kinross Council are fitting kerbstones that have a notch cut in them that enables amphibians to walk past gulleys.

Mitigation is about enabling us to live with wildlife and wildlife to cope with us. 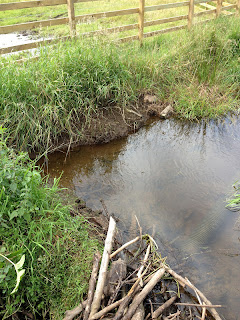 The water level has risen since the photographs I took just after the installation of the flow device, but is still well below former levels and, above all, below the level of the field behind. You can see water lying in the gateway behind the new post and rail fence. 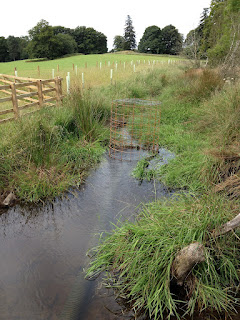 The far ground of this photograph shows a new riparian strip, planted and fenced last spring. 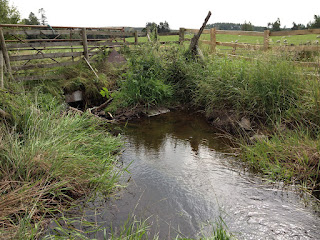 The bridge over the ditch with the dam.