Beavers and a Timber Operation 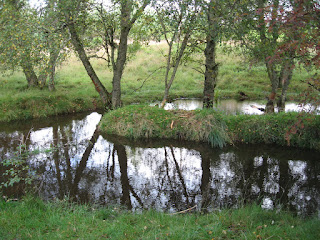 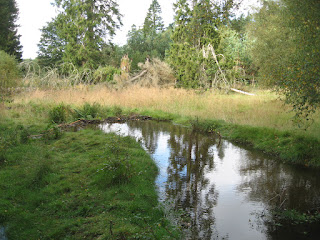 These two photographs show the landscape by the Bamff drive as it was a year ago.

Things were to change because we wanted to fell the Whitehills plantation. Overflow from the dam in the picture shown above was running down the drive. This worried the contractor, Ken Barclay. He thought the drive would not stand up to the heavy lorries with water running down it. 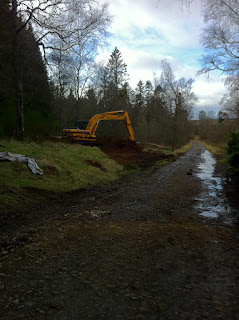 This photo shows the water running down the drive.

The dam was breached, but rebuilt by the beavers. Then, another attempt was made to cut a notch in the dam, but it collapsed, causing a flood down the drive. I was furious. With hindsight and the acquired skills of Lewis Smith and Mark Blair, we should have installed a pipe and cage levelling device, but that was to come.

Over the weeks that followed the beavers rebuilt the dam, as in the clip of video above. 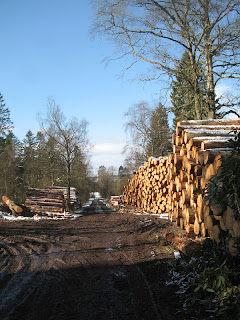 The plantation was felled with astonishing speed and the timber stacked by the side of the drive.
The drive, once an elegant carriage drive and admired by archaeologists, received rough treatment at the hands of the heavy machinery. The wet year and the mud made things worse.

The reason that the drive was used for the extraction of timber and as a loading area was that Perth and Kinross Council would not grant a licence for the use of the nearby public road for this purpose. In the past this was customary, but is no longer permitted.

Unfortunately, some of the timber blocked the culvert that led the under the drive. The overflowing water ran down the west side of the drive, dammed from time to time by the beavers, until the slope of the ground made it flow across it. Despite this, the beavers continued their damming to stop the water flowing down the drive. Well done, beavers! 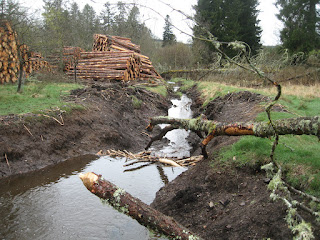 This photo shows the ditch west of the stacked timber along the drive. A dam is in course of being rebuilt. 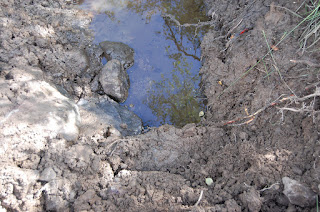 At last all the timber was driven away and it was possible to unblock the culvert. Fortunately, it turned out not to be seriously blocked under the drive, but choked by sediments and the weight of timber that had been lying against its entrance. 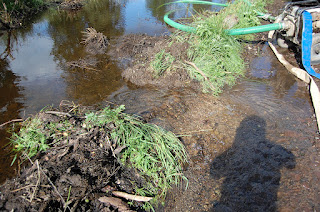 Stewart Crabb, who did the excavation, thought he might need a pump to lower the water level upstream of the drive so that he could see what he was doing. In fact this turned out to be unnecessary. 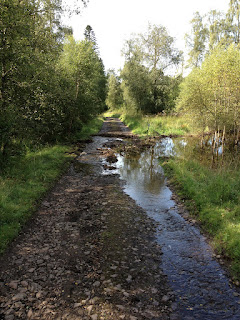 Here is the flooded drive downstream of the blocked culvert. Humans have added a dam to the one begun by the beaver to prevent a heavy flow reaching the Lodge. 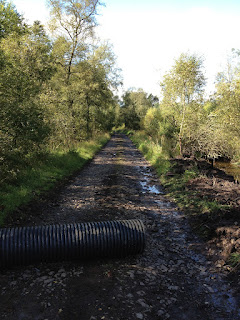 This is the drive, looking south after the culvert had been cleared, but before the addition of a 450mm pipe to the inflow. 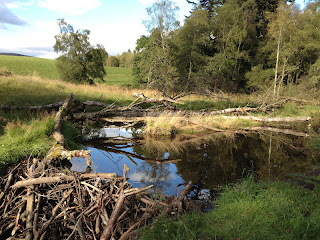 Here is the dam that the beavers have built to replace the dam that was destroyed in February this year (or was it March)? 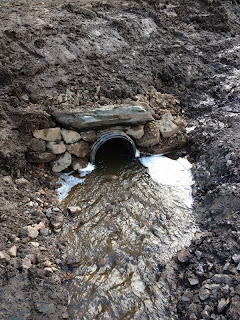 And here is the entrance to the culvert with the pipe in place.

All useful experience, I think.