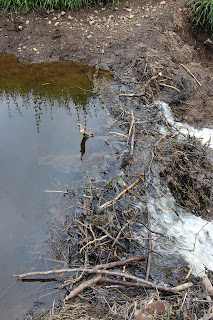 The repair of the breached dam is well underway and the pool behind the dam is full of parr, leaping up to catch the insects.
Our friend, David Wilson, stayed for the night, so he accompanied me to see the beavers. We reached the pool to the east of the drive, striving to avoid crunching the road metal that has been spread to fill the pot-holes formed during the winter. It was soon apparent that something was up: the beavers were out and about, patrolling the pool. I became aware of a high whistling sound, wondering first if it was a bird: but which bird? Then, looking right, along the drive I saw an otter emerging from the vegetation: the cries came from it. I could see the movements of its mouth as the whistles sounded. The animal turned about and disappeared back into the pool.

The video on YouTube is a sticking together of two or three separate clips, the last of which shows two otters as they came up onto the drive, walked away from us and then disappeared down the bank to swim upstream in the Burnieshed Burn.

Moments after the otters had left, we saw the five young mallard swimming serenely among the tumble of dead dogwood in the pool.
Posted by Paul Ramsay at 10:16