The heavy rains of the day before yesterday proved too much for the lowest of the big dams along the Burnieshed burn. 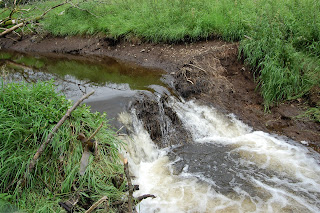 It burst sometime between the late mornings of the sixth and seventh July. 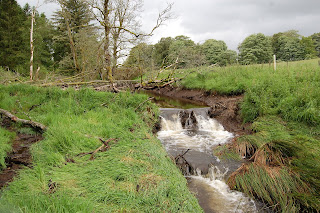 The tree tube in the top right of the photograph gives a helpful reference point for both pictures: the one above and the one below. 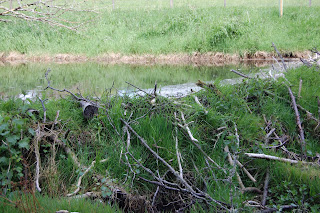 This photo is a 'before' photo, which you probably guessed.
Yesterday evening Paul Scott found the lower one of these salmonid parr just below the surviving part of the dam. It may be a salmon parr. The two little fish must have been washed over the parapet of the dam and left behind when it was breached and the water rushed through the gap this made in the dam. 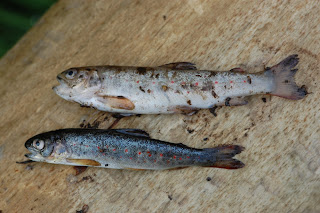 I found the lighter parr this morning, close to the darker one. It is probably a brown trout parr.
While Paul was watching beavers and finding the darker of the two parr, I was standing by the drive watching a kit feed and swim around.

Here is the link to Youtube to see it.

http://www.youtube.com/watch?v=px2TIwjfDK8
The sighting of the kit made the reason for the defensive activity of the beavers last Friday very plain. They recognised the otters as predators and were determined to protect their own. In doing so they protected the five mallard duckling which have been sharing the burn with them.