A Break in London

Away for a break in London; a change, you might think, and so it is physically speaking, but laptops, Google, facebook and twitter, mean that we are yoked to the same tasks and projects.

News has reached us that Erica is dead. She died in Edinburgh Zoo, having not taken well to captivity, it seems. So much for the curious notion that the free beavers of the Tay were being captured for their own good.

In his obituary for Erica on the Scottish Wild Beavers Group blog, Paul Scott speaks of Erica as being one of the first beavers to be born in the wild. This is not quite right: it is very likely that beavers have been breeding in the Tay and its catchment since 2001.

Roseanna Cunningham said, at the second Brian Taylor 'Big Debate' in Perth (was it the 17th or 18th of March?) that policy could not be decided on 'cuddleability'.

Here is an interesting link about flooding at Belford in Northumberland in 2008. The report recommends the kind of management that beavers do for nothing.

Having said that, I should recognise that beavers have their own approach to what constitutes a desirable landscape and this may not coincide with what humans would like but, as we know from the experiences of others, there are solutions that enable beavers and humans to coexist to both species' advantage. And, of course, to the great benefit of many other species.

And here is a link to YouTube, which shows the morning after the floods at Belford of September 2008: 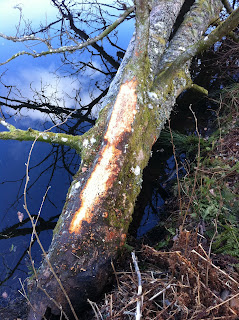 A windblown sycamore, whose bark beavers have been eating. The tree has been dead for two to three year: I suppose there must be some nutritional value in the lichens and mosses that are growing on the dead bark 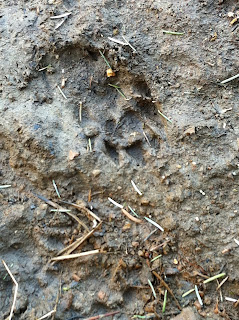 An otter's track in the silt. 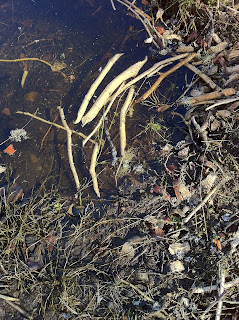 Freshly stripped twigs by one of the Burnished dams.