The name of Jules Pretty came to mind recently when I received an email from Chris Spray, professor of Water Science and Policy at Dundee University.

Here is a quotation from part of Chris's email.

'At a UK scale the total cost of environmental externalities arising from agriculture has been estimated by Jules Pretty at Essex to be roughly £2.3 billion - contamination of drinking water with pesticides is estimated to cost £120million/year, with nitrates £16m, and phosphate and soil £55m. The cost of damage to wildlife, habitats, hedgerows and dry-stone walls was estimated at £125million, from emissions of gases £1113m, from soil erosion and organic carbon losses £106m and from food poisoning £169m. Huge figures, and this doesn't even consider the more recent interest we have in Scotland in such areas as flooding and flood risk reduction.'

This problem of the externalities is one that affects us all. At one level you may see the problem as one in which individual farmers and landowners profit at the expense of the rest of the community. At another level it means there must be recognition that rivers cannot be treated merely as drains in the winter and sources of irrigation water in the summer. There have to be solutions that make sense for us all and the environment on which we depend. 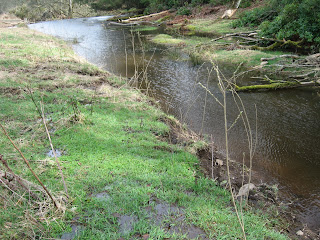 Nearly every year there is some planting of trees to be done, so when I order the trees I include some extra ones. This year, in a moment of enthusiasm, I ordered 100 crab apples and 1,000 willows. I have just spent a rewarding hour planting one hundred grey willows. In the past I have planted at rather wide intervals: two paces apart, but while in Oregon in February someone talked about the importance of planting at close spacing. I have been planting at about one pace apart today There is no doubt that the roe deer will get some of the saplings, but some should survive, and that is the main point. 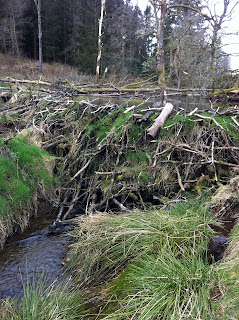 Here is the lowest of the big dams. Grasses are growing along it already. Soon there will be cress. 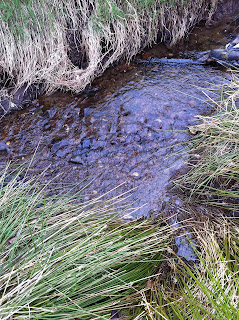 Below the dam I see clean gravel. The sediments that ran off the fields have been caught by the dam.
Posted by Paul Ramsay at 17:39