A Feeding Station and a Pair of Crane Flies 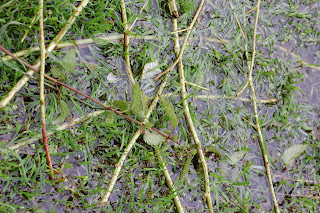 Beavers often like to eat in the same place. They cut sticks, for example, and take them to what has come to be called a 'feeding station' in English.
The French call these places 'réfectoires' which, to an English speaking ear, sounds monastic.
Be that as it may, I looked at the lawn that the beavers are in the custom of grazing at the side of the stream and found some cut wild raspberry canes. They had been stripped of their leaves and fruit. A single stem of stinging nettle can be seen in the picture and a rather ancient stem of hogweed (Heracleum sphondylium) is to be seen in the next photo. 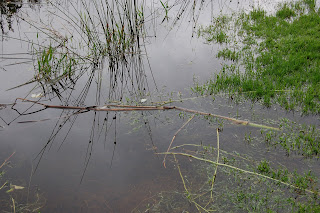 Walking on down to the lowest of the three dams, I stood and looked upstream. As I stood I noticed a pair of crane flies, locked in copulatory embrace. They landed and settled on a fern, which gave me time to change lenses and photograph them. 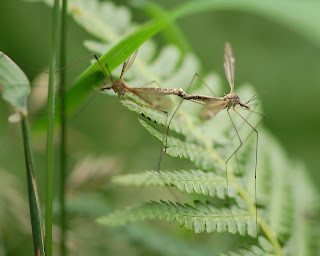