A visit to the Borders 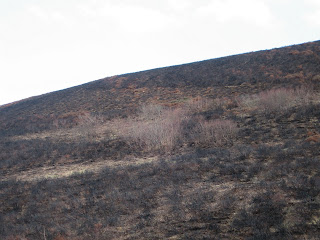 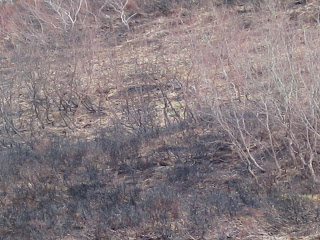 We went to Fi Martynoga's birthday party on Saturday and I wrote my piece for the 'Alyth Voice' after that visit to the Border country. Here is a photograph that depicts some burning on a bit of moorland that we passed on our way from Yarrow over towards Innerleithen. Looking at it now it looks as though the fire had missed the willow, but further back along that road I thought that the regenerating willow had very definitely been burned out along with the tall heather.
Reflecting on this, I think that where the willow was burned it doesn't show up in the photograph.
Anyhow, here is my latest piece for 'The Alyth Voice':

Bright sunshine and a brisk wind from the Northeast were giving the jackdaws an exciting time when I began to write my contribution for this month’s ‘Voice’. I saw one that morning, flying like a peregrine falcon, sweeping down with the wind and stooping as though on prey. In fact, it touched down by its mates in a field that had recently been sown with barley, no doubt to devour some seeds and any insects that had been turned up in the course of the cultivations.

Since that brisk morning with its gusty Northeast wind, we have enjoyed a dry spell with frosty starlit nights and whirlwind evidence of the changing seasons: the unfurling of leaves and flowers that happens almost before your eyes.

During the weekend of the 18th April we visited the Borders to attend a friend’s sixtieth birthday party. We stayed a night in Yarrow and set out in the morning to meet other friends who were walking over from near Innerleithen. We followed the public road for a few hundred yards, admiring the open woodland with its ash trees and wild strawberries in flower. Then, leaving the main road, we took a track that runs above the course of the Deuchar Water. We passed by a recently protected patch of native woodland, and on the other side of the track a piece of would be wood, unprotected and browsed, and emerged onto open moorland. A herd of blue-grey cows and their Limousin-cross calves were standing by their feeding place near two fine stells, but made way for us as we headed towards them, Once past the cattle, and climbing more steeply up hill, I heard the croak of a raven and saw the white rumped fluttering of wheatears, newly returned from their winter in Africa. Larks sang and we listened to them as we lay back on the heather, resting after our climb, and waited for our friends. A curlew gave its bubbling call as we set off down hill again, now accompanied by the others. Returning to Yarrow, we heard a twittering sound and knew as we looked up that the swallows were back. Not the one swallow that does not make a summer, but several; flying back and forth, darting through open doorways that led into dark sheds where they would build their nests and breed once again.

During our walk I had been struck, as ever, by what I think of as the barren treelessness of the Border hills (apart from the blocks of commercial forestry) and, in my mind, contrasted long established practices of land management with efforts to reforest the area through such wonderful projects as the one at Carrifran, where the Borders’ Forest Trust is re-establishing woodland. I am reminded as ever of the Chinese philosopher Mencius and the tale of Ox Mountain.

Much of the landscape that we had seen earlier in the day had been burned and, as we drove over the road that takes one down to Innerleithen, we passed moorland, where willow woodland that had been regenerating vigorously had been burned recently. Next to the burned moorland and its carbonised willows and heather we passed a plantation with small blocks of carefully tubed trees. Somebody had gone to great expense to plant these trees and protect them with those ugly and expensive tubes, many of which are destined to become rubbish, while the plantation’s neighbour had reduced to charcoal what nature was giving freely. What would Mencius have thought?