Sand martins, coppicing willows and a dig at Jean Balfour 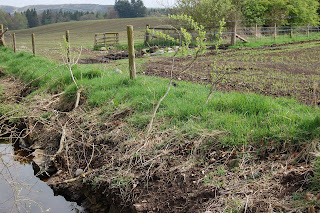 I set off a couple of evenings ago, meaning to go and look at this place again. If you look carefully you will be able to make out two sticks. These were chopped off their parent trees last autumn by beavers and, I think, somehow got themselves bedded into silt during the winter while the water level was higher than it is now, owing to the presence of a dam the beavers had built further down stream.
Since then, as a result of the demolition of the dam, the water level has dropped, leaving the branches behind and exposed. As you see they are putting out leaves now. 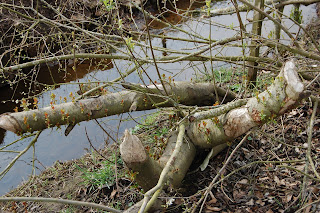 This photograph shows massive sprouting out of buds that will become new shoots.
I mention these things because some opposition to the return of the beaver comes from people who think that they will destroy riparian woodlands.
Jean Balfour is one of these folk (I should explain to my friends overseas that Mrs Balfour was Chairman of a body, now defunct, called the 'Countryside Commission for Scotland'. In that capacity (I think) she sat on the board of the Nature Conservancy Council, a Non Governmental Organisation that was charged with giving the government impartial advice about nature conservation. She wrote a letter to 'The Times' in December last year in which she was strongly critical of the proposal that beavers should be brought back to Scotland. Here is the link to her letter: http://www.timesonline.co.uk/tol/comment/letters/article5360654.ece.
Yesterday morning, 29th April I set off to feed my wild boar and noticed, as I approached the burn, a group of sand martins hawking for insects around above the pond. I had never seen sand martens there before a couple of evenings ago and yesterday evening when I saw swallows and a couple of house martens as well.
Today, making the same journey, I noticed the same gathering of sand martins, hunting for invertebrates over the pond. 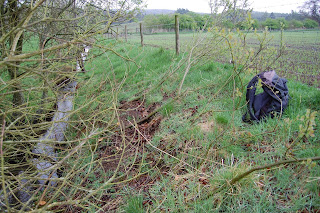 This photograph shows the ditch, much as it was before the beavers came.
The point is that the activities of beavers (through the production of dead wood and modification of habitat) contribute enormously to the productivity of riparian systems, very much to the benefit of salmon and trout.
It may be true that the building of dams in the smaller tributaries may prevent salmon from
reaching spawning sites in years of drought, but this is not necessarily the case. Where it is the dams can be removed at the critical moment, as happens in New Brunswick on the Miramichi River.
There is good evidence to show that young salmon raised in pools created by beavers benefit from the more abundant habitat.
Posted by Paul Ramsay at 17:55