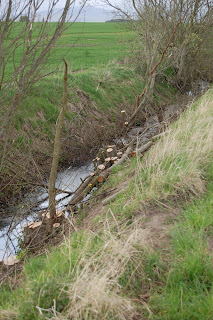 I visited the Dean Water today and took the two photographs that you see. 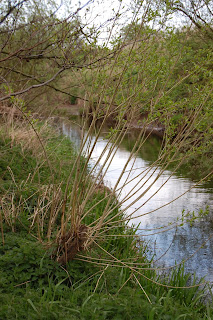 On the right is a section of the Dean Water in Angus, Scotland. This stream is really a drainage ditch that flows eventually into the river Isla. Three hundred years ago Forfar Loch, a small bit of which still survives, stretched almost as far as Glamis Castle, but most of the loch was drained during the 18th Century.
Beavers now live along the course of the Dean Water.
This photograph shows a willow that was cut by a beaver possibly as much as two years ago. The young shoots are last year's growth.
Farmers do not like to have too many willows along the deep ditches that continue to keep the former loch cultivable and so cut them back, as in the photograph on the left. The beavers like to do the same, though a little untidily and less rigorously than the humans.